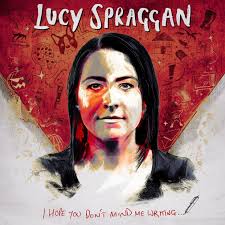 The 27th of January this year was a happy day. Another album release from the incomparable Lucy Spraggan. If you’ve never encountered her before I’d recommend looking her up, she’s hard to describe without comparing her to those lesser than her. She has one of those voices that sticks in your head, I can’t cover her songs because I end up singing in her accent –  and I can’t pull it off. I loved Lucy’s last two albums, so let’s take a walk through this one together and see what we find. If you’ve listened to this or it’s on your list let me know what you think.

An interesting opening line to an album?

‘I’ve been told that I’m not good enough a million times.’

The first listen I assumed this was a love song, not an unusual opening for an album. But as I listen again I have a feeling that this is more a message from Spraggan to her friends, and somewhat to herself. This is a fight song, declaring ‘I’m gonna stand here and fight with you.’ There’s a narrative of survival, of falling and rising. It’s catchy as hell and a punchy opening to the album with a catchy techno-esque hook, while still remaining the feel of ‘this could be played by a band live and it would still sound this good’ which colours a lot of Spraggan’s earlier work.

Another quite violent song title Lucy, is everything ok?

But again this is a song about companionship. This time not a fight song but more of a celebration of wild times had together. In theme it kind of reminds me of Katy Perry’s TGIF, though it’s very different in feel. To be honest the lyric of ‘If you wanna go bang we can, I know that you love to dance’ might be a bit of stretch for me, but again it’s catchy. There’s also some dialogue in the background of the recording that, in my opinion doesn’t really add anything to the song. But hey, to each their own?

Ok, I think I’m starting to see something emerging here. This is a beautiful, slightly slower song, that expresses not a sadness at growing older but more an understanding of how things are different now. It really reminds me, again in feel, of Ed Sheeran’s Castle on the Hill, it’s nostalgic without being utterly miserable. As someone in a similar position, this speaks to me greatly, things are changing and that’s not a bad thing but sometimes it’s a little confusing.

‘I’m working on my house
I’m building a career
How on earth did I get here?
I must be grown up’

#4 I Don’t Live There Anymore

Another song about change, again somewhat ambiguous in feeling. This is much slower, Spraggan reflects on leaving a home and on how someone from her past has ‘darkened the door’ but she no longer lives there. It’s about moving on, physically and also emotionally. Having said this, the last verse is all about redecorating, so perhaps it’s saying not that she has moved away, but rather she has changed to a point where she is unrecognisable and doesn’t ‘need you anymore’.

This is a track that’s half sung and half spoken, not my favourite style personally but Lucy does pull it off. I won’t spoil the twist ending. But this is a letter, it’s cathartic and it’s personal. It’s Spraggan writing for herself not for anyone else. It’s sweet, it’s heart wrenching and it’s beautiful.

Finally a protest song I can get on board with. Oh no wait, it’s another song about nostalgia, about change. Another talk-singing song…It’s cleverly written but it’s kind of like reading a buzzfeed article ‘only 90s kids will remember…’ not a bad song and not a bad theme it’s just not my cup of tea. I can get enough nostalgia on my newsfeed, I don’t need a spoken word piece about it.

Here we go, the pace has picked up and this is another one that has a catchy-ass chorus. If I had to explain what this was about I’d say it was a letter letting someone called William know that there is a girl who is into him… but Spraggan isn’t convinced William is a good person and should date her. I enjoy the implication of the F word without putting it in -classic pantomime moment. But in all seriousness this is a fun song that I can see myself singing into a hairbrush in front of the mirror tonight.

Aw we’ve slowed down again. Not to say that Spraggan’s slow songs aren’t as good, there have just been fewer upbeat songs this album. This is actually a really lovely song though. It’s all about giving your partner space if they need it. Spraggan seems to be convinced that there’s something going wrong in the relationship but is willing to make an effort to make the relationship work even if it means ‘If there’s some lonely nights ahead
I’ll stick to my side of the bed’. It’s a hopeful song for a hopeless situation. It’s an anthem for those with nothing left to lose.

Oh she knows how to tug at my heartstrings. This is about dementia isn’t it?

He asked me
“Where do you go when your mind doesn’t work with your soul?
I had memories made, now I can’t put a face to a name.”

Oh this is beautiful. Much like ‘Tea and Toast’ or ‘Mountains’ this is a song that moves you because it’s song based storytelling. Lucy must hang out with some amazing older people because the songs that seem to be based on them are always amazing. There’s also a welcome addition of a piano part and a string line which just lifts the song to a place of sheer emotion. I’ve been moaning about these slow songs but this is gorgeous and may even be bringing a tear to my eye.

Well this is a song about a not-so-pleasant relationship, that also has a lot of dog references. Interesting. It’s catchy (I don’t think Lucy is capable of not writing catchy songs). I’m not sure it was the right choice to follow a beautiful song about losing memory with a song about someone who can’t leave a relationship which also has a pun on ‘rough’ and ‘ruff’? I do think this is an important topic to explore and I do think this is a good song, I’m just not entirely convinced by where it falls in the tracklist?

This one does make sense as a follow on. Just look at this lyric:

And we hate each other you and I
It’s paradise

This works! It’s full of references to monsters and ghouls and I love it! It’s a ‘you’re terrible but I like it like that’ and not like some songs where you worry that this person is just in love with an abuser…Give it a listen, it’s another great song to sing in front of the mirror.

This is the song for dismantling mental health stigma I’ve been looking for. I don’t know if it’s based on personal experience or not but it’s a song about being medicated, hence the name. It’s got the simplest, yet well thought out lyrics. Another quintessentially ‘Spraggan’ song that will stick in your head for the next century.

Right, let’s hear how she’s closing this amazing album? It’s a slow song? It’s quite…twee? And i’m fairly sure it’s about parenthood. Which is definitely a universally understandable theme…not. So this is a personal song. It’s actually really nice, it’s a little repetitive but that’s not to say it’s not enjoyable. A slow ending to an album with quite a few slow songs.

Final thoughts? I’m not sure this album is as good as ‘We Are’ but that had a lot more loud and upbeat songs to dance along to where this album feels a lot more introspective. Perhaps I shouldn’t compare the two? Maybe when I need a mellow moment I’ll put this album on and when I want to crank up the volume and get stuff done I’ll put on ‘We Are’. Don’t get me wrong, an amazing album. If anything Spraggan has given us exactly what we needed, songs for every scenario. This definitely has my stamp of approval, you just might need a box of tissues at hand if you’re feeling a bit emotional…

One thought on “Track by Track, Lucy Spraggan – I Hope You Don’t Mind Me Writing”