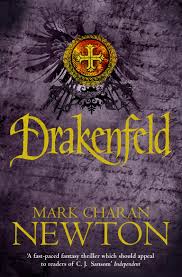 I’m working my way through my ‘to be read’ pile and this has been at the bottom for a shamefully long time. I finally decided to suck it up and get this thing read!

I think the main reason I never got round to this book is that on paper (no pun intended) it has a lot of aspects to it that I don’t like. It’s first person, with which I often find fairly hard to engage and to top it off it’s from the perspective of  a man. Not that I think it’s impossible to write from a male perspective for a female audience, nor would I only want to read books with a female protagonist (though that certainly is my preference). Although I’m still not a fan of first person dialogue and I still think male perspective can be a bit exclusive (for me) I did actually enjoy this book.

Bearing in mind that it usually takes me a day, maybe two, to finish a book of this length, the fact that it has taken me four days to reach the end, I think, is quite telling of how long it takes to get into this text.It reminds me a bit of the first time I read Eragon, where it took me about 2 weeks to get past the first few chapters because I just couldn’t work out what on earth was going on. But I powered through, and the plot does pick up around page 100 or so, if you’re willing to give it a chance.

But enough about my inability to sit down and read things, what’s this book about? Is it any good? That’s what has hopefully brought you here. This is a weird kind of fantasy novel for me, since it is an entirely fictional world, but one which has a metaphysic entirely mimicking reality. Essentially it’s Roman society with a few changes and without having to worry about being historically accurate (I can see the appeal for an author/editor – much less fact checking). So in terms of world building it wasn’t entirely my cup of tea, but I’ll chalk that down to my bias towards magic which is non existent in this particular title. Once I’d accepted that I started to get my teeth into the actual story more.

I’d describe this book as an ancient history, fantasy, murder mystery, thriller. Which sounds like it could either be a recipe for success or disaster. In my opinion the plot and the mystery is well thought out, the clues are there but they aren’t so obvious that you guess everything, there’s just the right amount of sex, drugs (well – poison) and dismemberment to keep everything interested. I’d be lying if I said it was my ideal plot line, but for something which I thought I was going to hate, I did actually enjoy reading this.

I think what sold it for me was that I liked the main characters, Drakenfeld himself has the ideal balance between being amazingly good at solving the puzzles but also wracked with human error. Equally, his partner Leanna was for the most part interesting, I might have asked for a bit more from her perspective, which I think would have been an interesting road to go down had the book not been first person.

What I’m really saying in all of this is that this book was far better than I’ve been giving it credit for all these years. If I’m being brutally honest, I’m unlikely to read it again, it’s being donated to a charity shop at the next opportunity. However, for a one time read this was genuinely well written and entertaining. There are bound to be those of you for whom first person male perspective is just what you want and if so I think this is worth giving a try. Please don’t let yourself be put off by the first quarter, it gets a lot more interesting I promise.