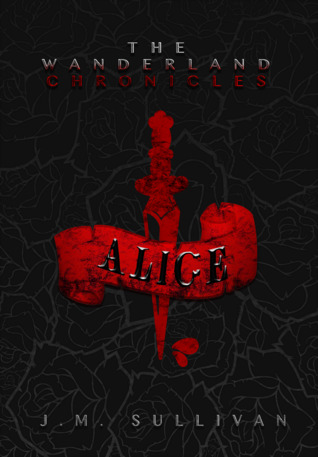 Zombie Alice in Wonderland sounds like possibly the least creative Halloween costume ever. But put that concept into a book and how does it fare?

Ever since the outbreak of the Plague, life hasn’t been easy, and for seventeen-year-old Alice Carroll, it just got worse. Her sister, Dinah, has contracted the ‘un-deadly’ Momerath Virus and without a cure, will soon be worse than dead. She’ll be momerath.

Alice must leave the safety of the Sector and venture into Momerath Territory to find the antidote – if it exists. Chasing a rumor about a mysterious doctor with the cure, Alice falls down the rabbit hole into Wanderland, where ravenous momerath aren’t the only danger lurking.

So this book was billed to me as sci-fi and fantasy and also horror. Now I don’t read a lot of horror (in fact I don’t read any horror) so I can’t speak to that genre but I would say this falls firmly into the sci-fi category. That really interests me since Alice in Wonderland is such a fantasy novel and retellings/spin off novels tend to lean on that fantasy element (Heartless is one example from earlier this year). I actually thought the concept for this setting was, while not particularly new, very well considered. Sullivan clearly knows Carroll’s work well and the Wonderland references scattered throughout were very much appreciated by me.

I did enjoy the character of Alice, which is not something I normally do since so often she comes across as a bit of a Mary Sue. Give her real motivation and a machete and it turns out she’s a really great character.  Her motivation is clear throughout and though she does get a tad distracted by attractive people at times it’s not a full on romance plot so I will, for now, give it a pass.

The supporting characters were also cool, I liked the interpretation of the Queen of Hearts (a tricky character to understand and to get right in a retelling) and the caterpillar. The march hare and the mad hatter were the two characters who best conveyed the ‘horror’ aspect, they were truly disturbing, but not so much that I wanted to stop reading.

I don’t know if it was indicative of my interest in the plot or my desire to work out what the secret message running through the book’s text was (I won’t reveal it since I don’t know if it’s going to be  in the finished book) but I devoured this book in a day. I was drawn in by the plot and by the characters and I desperately wanted narrative resolution.

I don’t know if a sequel is in the works or if this is a standalone, it would probably work as either, certainly the Carroll references have not been exhausted. Only time will tell. What I will say is that if you are interested in an Alice in Wonderland retelling that shuns the whimsy that so often colours Carroll’s work in favour of a gritty and unforgiving sci-fi world-you won’t be disappointed here. If you’re looking for a full on gruesome horror novel this might actually be a little tame for you, but I cannot claim to know what is ‘industry standard’.

Alice: The Wanderland Chronicles is publishing on May 16th so, if this kind of thing is up your alley you still have time to preorder it!

Not my typical read but a varied diet is important in the life of a reviewer and it was nice to read outside the box a little.

By the way I received a free digital ARC review copy of Alice: The Wanderland Chronicles from the publisher (Pen Name Publishing) in exchange for an honest review. All opinions are my own and I wouldn’t recommend a book if I didn’t think it was worth reading.

What are your favourite wonderland spin offs? Let me know in the comments or on twitter (@judithcmoore) can’t wait to hear from you!