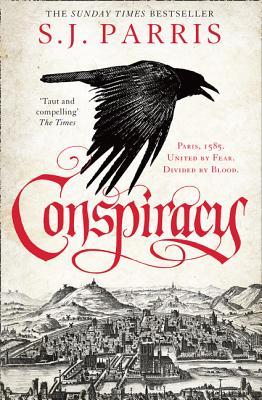 They say a varied diet is good for you right? In the interest of keeping my reading diet nice and varied I thought I’d delve into some adult historical fiction. I’ve seen this book on the Supermarket bookshelf for the last six months or so, so when I found it in the library I thought-why not? So how did this fantasy-loving, young adult fanatic fare with actual ‘grown up’ fiction?

A KING WITHOUT AN HEIR

Heretic-turned-spy Giordano Bruno arrives in Paris from London to find a city on the edge of catastrophe. King Henri III lives in fear of a coup by the Duke of Guise and his fanatical Catholic League, and another massacre on the streets.

A COURT AT WAR WITH GOD

When Bruno’s old rival, Father Paul Lefèvre is found murdered, Bruno is drawn into a dangerous web of religious politics and court intrigue. And watching over his shoulder is the King’s mother, Catherine de Medici, with her harem of beautiful spies.

A DEADLY CONSPIRACY IN PLAY

When murder strikes at the heart of the Palace, Bruno finds himself on the trail of a killer who is protecting a terrible secret. With the royal houses of France and England under threat, Bruno must expose the truth – or be silenced for good…

This is the fifth book in the ‘Giordano Bruno’ series, but, as is often the case with historical mystery novels, you can pretty much pick up the series at any point since there is a new mystery to be solved in every book, with a new host of characters. It’s a bit like how you can read any Sherlock Holmes story or Agatha Christie novel and still have a decent idea of what is happening.

This particular story takes place in Paris during the reign (in England) of Elizabeth I (I have an english-centric history so using English monarchs helps to ground me a little in historical fiction). I wrote on the Virgin Queen and her spy network during my history A level so, while I am by no means an expert, I had a fairly good idea of who some of the bigger players in this story were (such as Walsingham or Guise).

This was a fairly turbulent time in european history and that definitely comes through in this novel. It’s a murder mystery where the motive could be political, religious, passion or an entirely different reason. This makes for good reading as you’re constantly kept on your toes.

What I was less of a fan of (though perhaps it may be an accurate description of their role in this period but I’m almost certain that every woman in this book was either royal, a sex worker, a widow or a mother. This book is quite heavily male-centred and while that isn’t always a bad thing it just wasn’t that interesting to me as a reader, especially since I have been reading some bad ass female characters of late.

To boil this review down to the essentials, I just don’t think this book was for me. It’s not a genre I actively dislike but I needed the writing to be snappier and for the characters to have a bit more substance. At times it is a little hard to hold onto why the main character is allying himself with various other people, his motivation isn’t always clear, and his actions often just seem a bit ridiculous.

If you have a particular passion for French religion and politics in the 16th Century then this might be just the novel for you. As for me, I’ll be heading back into the land of fantasy for a time…*happy sigh*

Have you read this or any other books in this series? How do you shake up your reading diet? Let me know in the comments below!