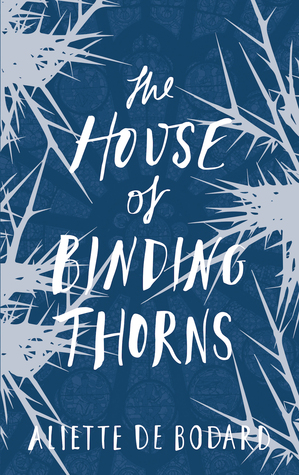 Hello mortals and welcome to another Chain Interaction book review. Before we kick off with this review of Aliette De Bodard’s The House of Binding Thorns I recommend heading back in time and reading my review of the first title in this series The House of Shattered Wings just to give you a feel for where I’m coming from. It’s so rare that I actually read a series in the order in which it was published so I’m a little excited. You can also see my mini review of the short story Children of Thorns, Children of Water which does make a whole lot more sense now that I have read The House of Binding Thorns. So now that you’ve gone back and read both of those…what did I think of the second book in the series?

As the city rebuilds from the onslaught of sorcery that nearly destroyed it, the great Houses of Paris, ruled by Fallen angels, still contest one another for control over the capital.

House Silverspires was once the most powerful, but just as it sought to rise again, an ancient evil brought it low. Phillippe, an immortal who escaped the carnage, has a singular goal—to resurrect someone he lost. But the cost of such magic might be more than he can bear.

In House Hawthorn, Madeleine the alchemist has had her addiction to angel essence savagely broken. Struggling to live on, she is forced on a perilous diplomatic mission to the underwater dragon kingdom—and finds herself in the midst of intrigues that have already caused one previous emissary to mysteriously disappear….

As the Houses seek a peace more devastating than war, those caught between new fears and old hatreds must find strength—or fall prey to a magic that seeks to bind all to its will.

Aliette De Bodard has a way of creating atmosphere that very few other authors have. She creates this alternative version of Paris that makes me wish I had any artistic ability whatsoever because I would love to paint it. Something about her descriptions and her writing style just conjures these really powerful images and intense feelings I just can’t pick it apart it is so captivating.

What I will critique, even though I don’t want to get negative because I really enjoyed this book (in fact, these books) is I don’t think she is a particularly wonderful storyteller. I got to a point where I wasn’t actually sure who was on the side of whom and what precisely was happening. I mean I understood the major plot arks but there were quite a few intertwining stories that never really made complete sense to me. But that is the only reason this book didn’t get five stars from me. I think it would require a re-read to really get to grips with the plot and I’m the kind of person that likes to know what is going on from one pass.

Back in to the positives, this book, as does the first book, tackles some real-world issues in a fantasy setting quite well. The main example I could mention is addicition. The story of Madeleine, an alchemist addicted to Angel Essence is moving and at times hugely frustrating, which is what makes it so powerful. This isn’t a fairytale story of miraculous recovery, it’s far more real than that.

There’s also a character who specifically states he is interested in more than one gender which is thrilling, as well as multiple same-gender pairings which fills my heart with joy. It was nice that this wasn’t the entire scope of the novel it was just a feature of the characters in the context of the wider plot.

So yes, I cannot fault De Bodard’s writing style, in fact I adore her prose. My one issue is her storytelling, but I may be being overly picky. Perhaps, if my TBR ever diminishes slightly, I’ll be able to read it again and fully get into the story.

Have you read any of this series? Do you have any strong feelings? Let me know in the comments below or tweet me @judithcmoore.

Don’t forget to stop by again on Monday when I’ll be reviewing a new fantasy release….

The House of Shattered Wings