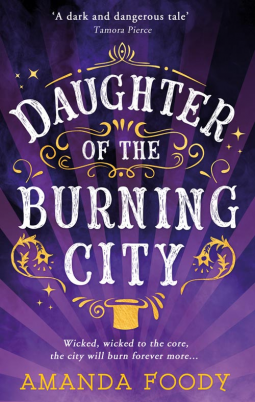 I’m writing this about a week before I’m actually going to post it (hi there future me) and I am so excited about this book that I want to just press post as soon as I’m done writing because I want to tell everyone how amazing this book is!

Sixteen-year-old Sorina has spent most of her life within the smoldering borders of the Gomorrah Festival. Yet even among the many unusual members of the traveling circus-city, Sorina stands apart as the only illusion-worker born in hundreds of years. This rare talent allows her to create illusions that others can see, feel and touch, with personalities all their own. Her creations are her family, and together they make up the cast of the Festival’s Freak Show.

But no matter how lifelike they may seem, her illusions are still just that—illusions, and not truly real. Or so she always believed…until one of them is murdered.

Desperate to protect her family, Sorina must track down the culprit and determine how they killed a person who doesn’t actually exist. Her search for answers leads her to the self-proclaimed gossip-worker Luca, and their investigation sends them through a haze of political turmoil and forbidden romance, and into the most sinister corners of the Festival. But as the killer continues murdering Sorina’s illusions one by one, she must unravel the horrifying truth before all of her loved ones disappear.

I adore a circus setting. I loved The Night Circus, I swooned over Caraval, I broke my heart over Flight of a Starling. The performer in me loves the idea of the spectacle and I also think that circus-based books tend to be amazing at crafting an atmosphere and a sense of place. This book definitely manages that, you get all five senses (and more) treated to layers of description, though not in the same way as, for example Laini Taylor’s books do. It’s less flowerly language but it’s no less evocative.

The characters in this book were all so well thought out. I am beyond excited for the amazing fanart that I think is going to spring up from this world. Sorina is a character with no eyes who wears phenomenal masks and her family of freaks/illusions are all equally if not more fantastical. So yes, fanart and also cosplay I am so ready for this.

Did I mention the main character is bisexual and it isn’t made a big deal of but it doesn’t feel gratuitous? Well that is true and it’s amazing! We also have a love interest which is represented as, in my interpretation, demisexual which felt like it was done well though I’m not a part of that community so I shouldn’t speak for them. But this book felt like it was consciously trying to be representative, I don’t know that it went as far as it could have but there’s room for improvement in virtually every book I read.

So we have phenomenal characters, what about plot? It’s a fantasy murder mystery which ticks all the boxes for me! There’s intrigue and plot twists and betrayal galore, never a dull moment. You’re plonked in this world right at the heart of some action and you’re on the edge of your seat from there. This is the kind of book I read in a day and then I reread the next it was such a compelling storyline. I don’t want to give anything away so I will leave that where it is…

If I have to make one negative comment (and that is kind of my job as a reviewer) I think the dialogue could have been a little less stilted? There were a few instances where the verb ‘said’ was used a bit too frequently and it just made this book a little less well written than I think it could have been otherwise. But that is me being incredibly nitpicky and I wouldn’t say it will ruin anyone’s enjoyment.

I am so excited for when other reviews start coming through for this book, I want to know what everyone else thinks (and I really want the artistic people to start making some fanart so I can buy it…).

Daughter of the Burning City releases in the Uk on the 25th of July (I believe) so, if you haven’t already maybe get that preorder in so you don’t have to wait?

By the way, I received a free digital ARC copy of this book from the publisher (HQ) in exchange for an honest review, all opinions are my own.

What do you think? Have you added this to your TBR? Let me know in the comments below (and link me if you have a review)