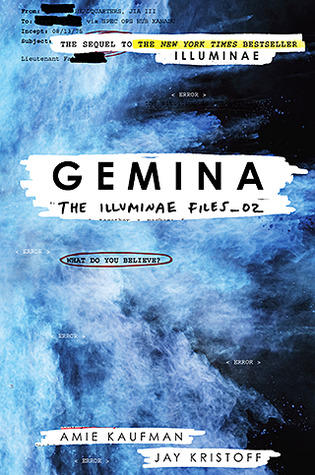 Seriously. How? I read and reviewed Illuminae back when I started blogging and now, albeit a couple of months later, I managed to grab a copy of Gemina from my local library. It was all I could do not to just scrap my reading schedule and get to this straight away but I behaved and now here we are!

Yes this is going to be a fairly rambly but extremely positive review!

Moving to a space station at the edge of the galaxy was always going to be the death of Hanna’s social life. Nobody said it might actually get her killed.

The sci-fi saga that began with the breakout bestseller Illuminae continues on board the Jump Station Heimdall, where two new characters will confront the next wave of the BeiTech assault.

Hanna is the station captain’s pampered daughter; Nik the reluctant member of a notorious crime family. But while the pair are struggling with the realities of life aboard the galaxy’s most boring space station, little do they know that Kady Grant and the Hypatia are headed right toward Heimdall, carrying news of the Kerenza invasion.

When an elite BeiTech strike team invades the station, Hanna and Nik are thrown together to defend their home. But alien predators are picking off the station residents one by one, and a malfunction in the station’s wormhole means the space-time continuum might be ripped in two before dinner. Soon Hanna and Nik aren’t just fighting for their own survival; the fate of everyone on the Hypatia—and possibly the known universe—is in their hands.

But relax. They’ve totally got this. They hope.

The style of The Illuminae Files is what really makes them exceptional. Telling your story through video transcripts, instant messenger printouts and the ramblings of a mad AI should not work. But the brains that brought us Starbound and Nevernight somehow manage to make these not only coherent, but hugely enjoyable.

The nice thing about Illuminae was that, while we didn’t end on a cliffhanger, there was nevertheless a sense of completion to that story. That’s something you don’t often get in YA series at the moment, everyone seems to be vying to get the preorders of their next book up through a cliffhanger ending. However, the way that this story tied in with that in Illuminae made it so that it made sense to meet entirely new characters (I say entirely new, there’s some crossover though it’s subtle and clever like most of the things in this book) and you don’t mind having to ‘start over’ with a new plot because the context of these files as part of a wider investigation just makes sense.

There’s a romance plot in Gemina as there was in Illuminae and these authors aren’t shying away from it, there’s a fair bit of flirting in their. However, the romance is handled mostly in a realistic way and when there are more important things to think about (both human and alien) quite sensibly these characters focus on the matter at hand. So it’s the kind of Romance I love to have in books and it’s the kind of romance that YA books that aren’t specifically romance novels should be thinking about including.

The main thing that fascinates me about these books is the layout. Some pages are illustrations, some are transcripts, some are words laid out across a page in a spiral. I’d be interested to know whether Jay and Amie set this out themselves in the writing stage or if they have a graphic designer in the publishing house who ‘illustrates’ the books? I know Kristoff has a design qualification so I wouldn’t be surprised if most of the ideas/execution was from their end. It’s such a unique way of laying things out and it is really enjoyable to read – though you do look a little bit odd when sat on the bus spinning your book round and round, trust me.

I think I actually enjoyed the plot of this book more than I did Illuminae just because I like the idea of the combined human and biological threats where I sometimes got a bit confused by Aidan in book #1. Having said that, I did love that book so it’s more to both book’s credit that I loved this one even more.

If you ever feel a little stagnant in your reading, if you’re looking for YA science fiction that will be different from everything you’ve ever read then I highly recommend picking up a copy of Illuminae. I’m beyond excited for Obsidio which publishes in March next year (if Goodreads is to be believed) and I feel a Want-to-Read Wednesday coming on!

Have you read these books? Do you have any plans to? Let me know in the comments below! Don’t forget to hit that follow button so you never miss a post!

13 thoughts on “How are these books so amazing? Gemina, Book review”