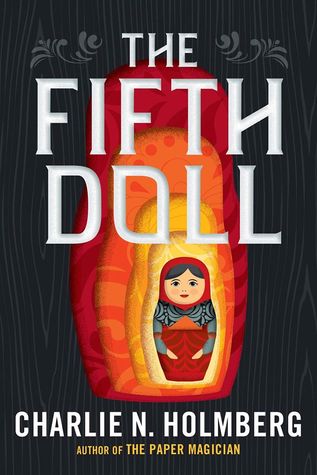 Kinda creepy fiction from the author of The Paper Magician? Why yes I am interested thankyou kindly for asking.

After discovering a room full of matryoshka dolls wearing the faces of her village, a woman learns she may be trapped inside one–but unraveling the sorcery carved into each doll unleashes dark consequences that rip her from the only home she remembers.

What I loved most about The Paper Magician series was that they were super easy to read. They were like the literature equivalent of a hot cup of cocoa and a comfy chair. This book is somewhat less lovey dovey than those books are (I would use the word ‘darker’ but then I remembered all the blood magic in The Paper Magician and rethought my choices) but it still has that ‘easy read’ sense to it. I think it took me about an afternoon to get through this one, it’s not overly complicated, neither is it patronising. Maybe it’s like a hot cup of coffee in a comfy chair?

I love matryoshka dolls and the use of them in this semi-fantasy setting was really cool (I actually think the cover could have used this element even more and could have been even more pretty). In terms of world building I think this worked well given that, for the majority of the book, the world is a little mysterious.

In terms of strong female protagonists this one was fairly good? It’s a hard line to tread when you’re writing a book with that ‘easy read’ vibe because you don’t want to make the characterisation  too heavy but equally you don’t want to make a non-character. I think Holmberg does a good job of creating a varied cast of characters in such a short story.

I think this book tackles the idea of growing up and being exposed through the medium of this fantasy story in a subtle but effective way. It’s thought provoking and at times it’s really powerful. There’s also a little bit of romance that ties in with that but it’s not too intrusive, it just adds to that comfiness of the read.

I’m not going to suggest that this is one of the great works of literature of our time. But it was a stupendously enjoyable read and was a thoroughly pleasant book to sit down and read in one afternoon.

By the way, I received a digital advanced review copy of this book from the publisher (47 North) in exchange for an honest review. All opinions are my own.

The Fifth Doll releases today! So get your order in now if you haven’t already a9and enjoy if you have).

What say you? Are these kind of ‘comfy’ reads your kind of thing or do you prefer a weightier tome? Let me know in the comments below, also – while you’re here – hit that follow button so you never miss a post!