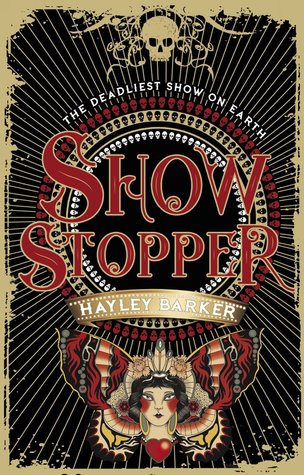 I admit it. I was drawn to this book because it had a shiny cover. I’m a magpie in bookshops I cannot resist a bit of foil. Shiny things.

I actually bought this book because I am equally susceptible to circus themes. The Night Circus, Daughter of the Burning City, Flight of a Starling all of these I basically read because I love the circus. There’s something about a fantastical circus setting that just sparks my imagination.

Set in a near-future England where the poorest people in the land are forced to sell their children to a travelling circus – to perform at the mercy of hungry lions, sabotaged high wires and a demonic ringmaster. The ruling class visit the circus as an escape from their structured, high-achieving lives – pure entertainment with a bloodthirsty edge. Ben, the teenage son of a draconian government minister, visits the circus for the first time and falls instantly in love with Hoshiko, a young performer. They come from harshly different worlds – but must join together to escape the circus and put an end to its brutal sport.

So at the back of this book Hayley Barker talks about how she was moved to write this book because of the increase in racial tension in recent years, which I don’t think anyone could argue isn’t true. This is pulled off pretty well in this book, the ‘ruling class’ is described as the ‘pure English’ residents so it’s pretty clear that this book is trying to describe a really racist future England. My one issue with this is it doesn’t mention that there was a time when the opinions expressed by the ‘ruling class’ in this book are opinions that have been held by people in the past (and to be honest the present) so while it is a horrifying vision of the future, it’s not implausible and it kinda ignores the way that racism is often the result of centuries of oppression not just a fantastical future.

This is, if you remove the setting, a fairly simple story of rich boy meets young girl from the wrong side of the tracks. In this case that girl happens to be a phenomenally cool tightrope walker called Hoshiko but the point remains that this is your very basic YA plot. That’s not to say it wasn’t done well, I just think this could have been so much more than a love story and the romance actually overshadowed all the other, more complex and interesting relationships that were going on. For instance I would have liked even more of the relationships between other children in the circus, maybe bringing in even more characters for the reader to have more of a stake in the goings on of the circus?

I did very much enjoy Barker’s writing. She definitely conjures a powerful circus in my mind, dark and terrifying as it is. She also has a way of describing pain that makes you feel it deep in your bones.

I think it’s always a little uncomfortable to read a book about how racism is bad written by a white author because there are so many complications and difficulties that come from that. Having said that, I did thoroughly enjoy this book, I think it is an important idea to explore and if it takes a YA novel about a fantastically dark circus to get people to engage then I’m all for it.

What say you? Did you enjoy Showstopper? Planning on it? Let me know in the comments below.