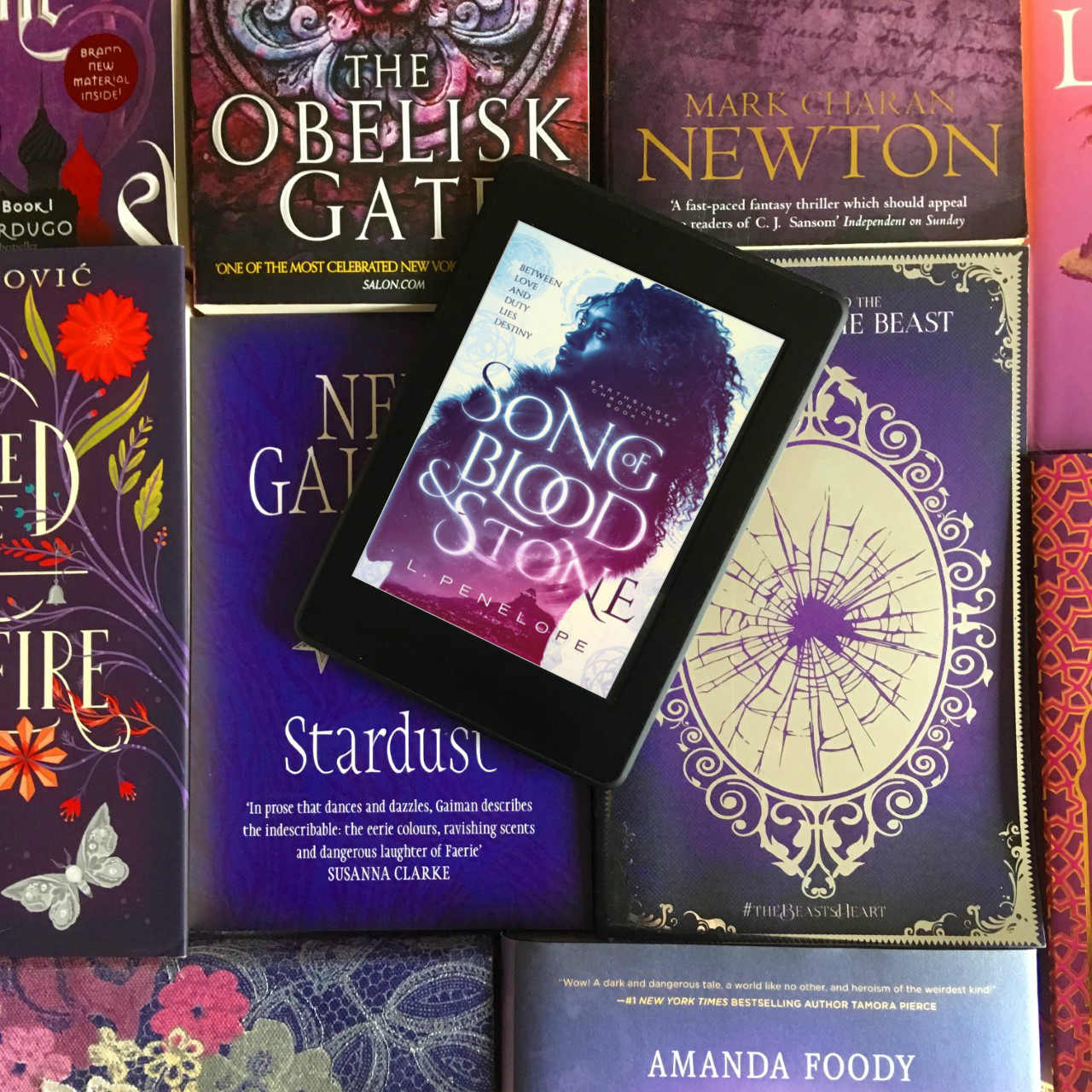 Hello humans! Today I’m reviewing L. Penelope’s debut novel, and the start of The Earthsinger Chronicles, Song of Blood and Stone. This book was initially self-published but was picked up by St Martin’s Press. This is an epic fantasy novel with two nations caught on the edge of war. I’ll let the Goodreads summary explain it better than I ever could, then I’ll share my thoughts!

A treacherous, thrilling, epic fantasy about an outcast drawn into a war between two powerful rulers.

Orphaned and alone, Jasminda lives in a land where cold whispers of invasion and war linger on the wind. Jasminda herself is an outcast in her homeland of Elsira, where her gift of Earthsong is feared. When ruthless soldiers seek refuge in her isolated cabin, they bring with them a captive–an injured spy who threatens to steal her heart.

Jack’s mission behind enemy lines to prove that the Mantle between Elsira and Lagamiri is about to fall nearly cost him his life, but he is saved by the healing Song of a mysterious young woman. Now he must do whatever it takes to save Elsira and it’s people from the True Father and he needs Jasminda’s Earthsong to do it. They escape their ruthless captors and together they embark on a perilous journey to save Elsira and to uncover the secrets of The Queen Who Sleeps.

Thrust into a hostile society, Jasminda and Jack must rely on one another even as secrets jeopardize their bond. As an ancient evil gains power, Jasminda races to unlock a mystery that promises salvation.

The fates of two nations hang in the balance as Jasminda and Jack must choose between love and duty to fulfill their destinies and end the war.

Find Song of Blood and Stone on Goodreads

Kicking off with a disclaimer (because disclaimers are important), I’m a white lady, this is a book written by a woman of colour with a protagonist who is also a woman of colour. Race and racism play an important role in this book and I will almost certainly have missed some nuances because of my own privilege.

The setting of this book initially confused me, I read epic fantasy and my brain automatically heads to the medieval. But this book is set in a far more modern world with various kinds of technology including cars and buses. That was on me for not getting into the right zone, it’s a refreshing fantasy setting, not feeling ‘urban’ but not limited by the technological developments (or lack of) in other epic fantasy novels.

This book largely consists of the romance between Jasminda (the protagonist) and Jack (the soldier she rescues). Set against the urgency of a land about to fall once more into war, this is a sweet love story with some steamy moments, I thought it was well-written and not as clichéd as I thought it would be.

The magic system is not explained in a huge amount of detail, because the protagonist doesn’t understand it completely, so the reader learns as Jasminda learns. I am a sucker for any magic system that uses the idea of song, it warms my musical heart, so I thought this was well-done. I would like to see the system and the different ways Earthsong can be used expanded on in later books, I’m not sure if that is the case as I know they do involve totally different characters. I’m going to have to read them to find out!

I had a great time reading this book, it has just the right kind of pacing to keep you engaged and to keep the scope of the adventure ever changing. This is a romance, but it is also so much more than that. There are powerful and timely political messages in this story, and messages that are timeless. It’s not the most unique YA fantasy book I’ve read, but I’ve read so many that it’s hard for any of them to feel truly unique anymore. However this was a very unique way of setting this story and I think anyone, romance lover or no, could enjoy this book.

Should you read this? If you’re interested in reading YA fantasy and supporting diverse authors then I think this will be a book for you!

What say you? Is this on your TBR? Let me know in the comments below!

One thought on “Song of Blood and Stone, L. Penelope – Book Review”

Welcome to Chain Interaction! I'm Judith, an Oxford based dragon fanatic and book lover and I'll be your guide to this collection of book reviews and whimsy. Enjoy!
Follow Chain Interaction on WordPress.com
Join 2,069 other followers