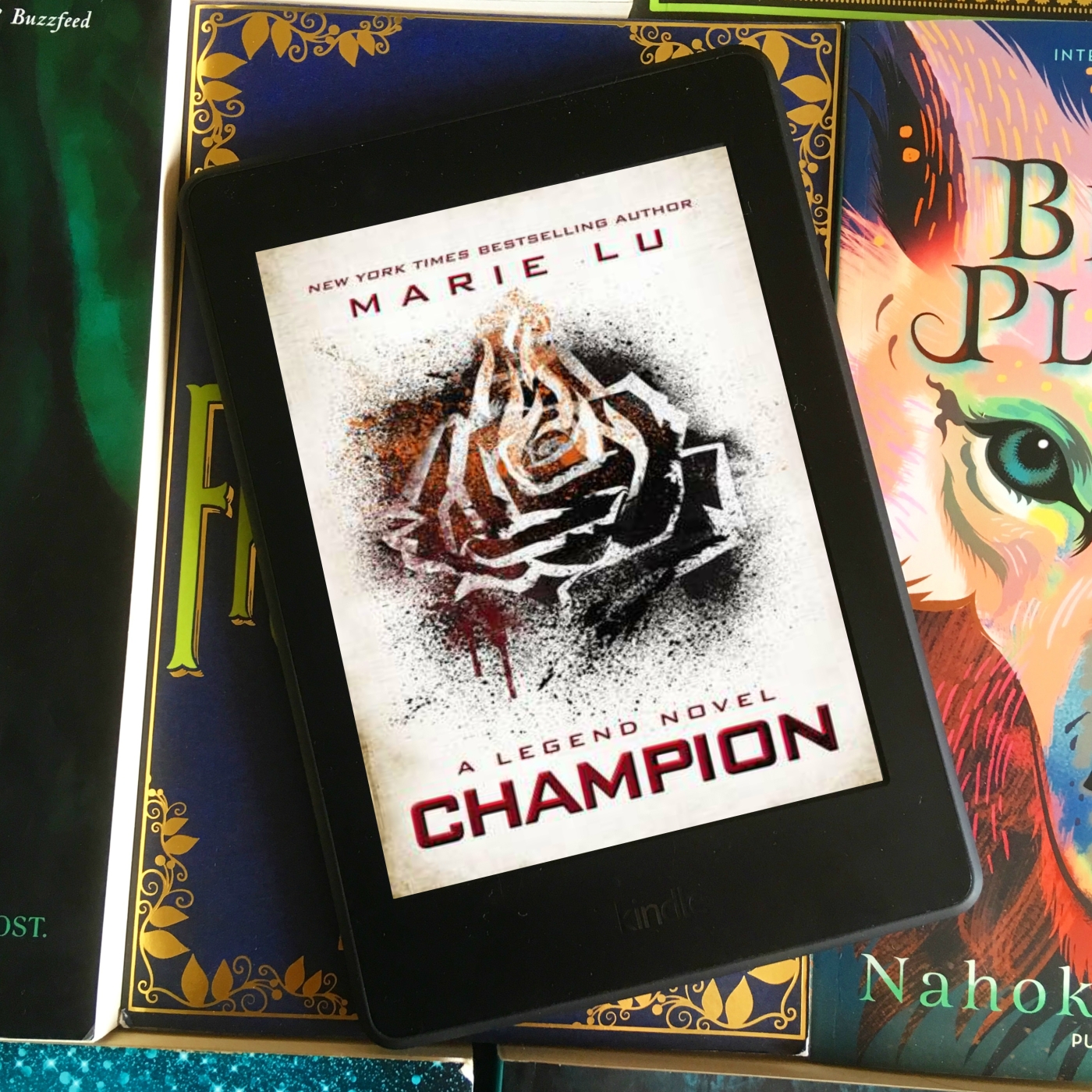 Hello humans! Welcome to the final instalment of my reviews of Marie Lu’s books (until I eventually get around to reading Warcross but honestly my TBR is currently the size of a young killer whale so I don’t know when that will be).  I have enjoyed this series more than I could have ever imagined and, just as Prodigy was a great example of a second novel so Champion is a great example of how to end a YA dystopian trilogy.

There may be spoilers in here for the first two books, kind of unavoidable, sorry.

June and Day have sacrificed so much for the people of the Republic—and each other—and now their country is on the brink of a new existence. June is back in the good graces of the Republic, working within the government’s elite circles as Princeps-Elect, while Day has been assigned a high-level military position.

But neither could have predicted the circumstances that will reunite them: just when a peace treaty is imminent, a plague outbreak causes panic in the Colonies, and war threatens the Republic’s border cities. This new strain of plague is deadlier than ever, and June is the only one who knows the key to her country’s defense. But saving the lives of thousands will mean asking the one she loves to give up everything.

As with the first two books in this series, Marie Lu takes the opportunity of a new book to further build the world she has created. In Champion, we get to go to see even more of this world, far beyond the single city in the Republic which was the setting for the first novel. I loved the different imaginings of how cities might work in the future, it makes complete sense, no one country is the same as another (culturally, economically etc.) now so why should that be true years from now? The other thing I liked was that these cities felt realistic at the same time as being futuristic, in that, even though they were concepts we don’t have today, they were 100% things that could happen (in fact it’s pretty much just technological limitations that stop us doing them).

As with the first two books, this is told in dual POV between June and Day. I thought this was used to great effect in this book since the two of them were living very different lives, at least for the opening of the book so two threads of the story can unravel simultaneously.

For a book series that has always been so action-packed, this book is a lot more character driven than the previous two (or at least that’s how it felt to me).  There’s quite a bit of the book given over to deliberation over difficult choices. That’s not to say that this book doesn’t have plenty of action – there are some amazing scenes with death-defying leaps and the like – but I think the character development in this book is some of the most powerful.

I was left feeling a little flat at the ending (no spoilers don’t worry), I think I just wanted a little bit more information rather than getting ‘this happened don’t ask how it did’. Maybe I was missing something a bit subtler, but I was interested, I wanted to know!

I recommend reading this series, it is from start to finish a great example of why YA dystopian fiction is a popular genre. Are these books perfect? For me, no, but they are absolutely some of the most entertaining books I have read in this genre for some time. If you’ve been wondering whether to pick these up, all I can say is – do the thing!

What say you? What do you think is the best book that ends a trilogy? Let me know in the comments below!