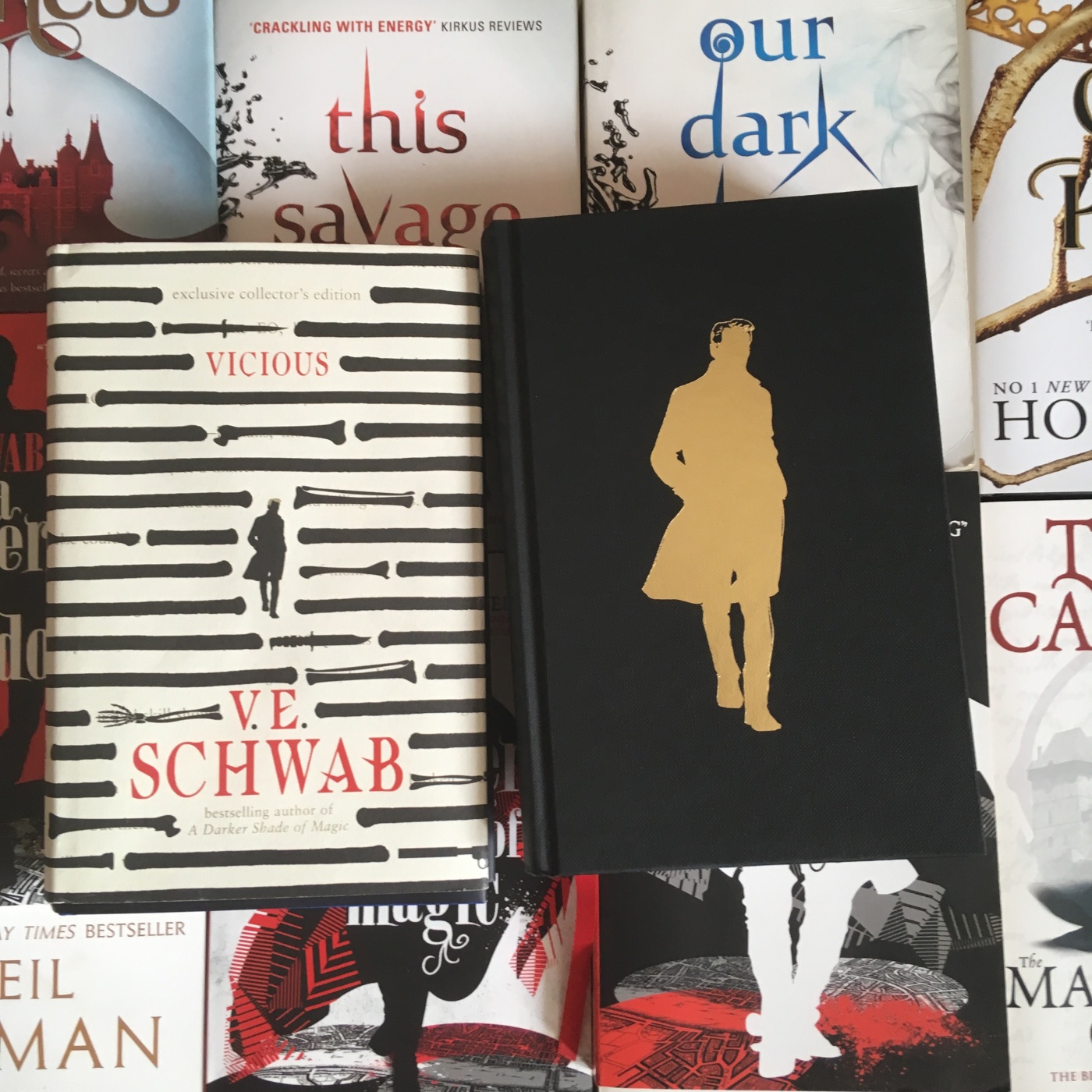 Hello humans! Yes, you read that title correctly, it is time to review Vicious. You know those books you love so much that you don’t want to review them in case it changes your mind? Yeah, this was one of those books for me. I’ve been pondering what I could possibly say that would explain how much I loved this – and I don’t have a good answer. So don’t blame me when this gets a little rambly and incoherent.

Victor and Eli started out as college roommates—brilliant, arrogant, lonely boys who recognized the same sharpness and ambition in each other. In their senior year, a shared research interest in adrenaline, near-death experiences, and seemingly supernatural events reveals an intriguing possibility: that under the right conditions, someone could develop extraordinary abilities. But when their thesis moves from the academic to the experimental, things go horribly wrong.

Ten years later, Victor breaks out of prison, determined to catch up to his old friend (now foe), aided by a young girl whose reserved nature obscures a stunning ability. Meanwhile, Eli is on a mission to eradicate every other super-powered person that he can find—aside from his sidekick, an enigmatic woman with an unbreakable will. Armed with terrible power on both sides, driven by the memory of betrayal and loss, the archnemeses have set a course for revenge—but who will be left alive at the end?

I think the concept, or the underlying themes and ideas behind this story, are wonderful. I’ve read quite a few examples of books that play with the idea of what makes a villain and how villains can be main characters. There is the cliché ‘he’s a villain but the gorgeous girl redeems him’ stories that are getting a little old, there are the ‘I’m a villain and you gradually come to hate me but it’s ok I die at the end and none of this development has meaning’ kind of stories. Then there are the very few stories that manage to execute writing a ‘villain’ well. Before reading Vicious the only other example of such a book was Forest of a Thousand Lanterns which is utterly phenomenal. One of the many things that make that story so powerful is that it’s always clear to the reader what choice the classic storybook heroine would take (often boiling down to a choice between love and power) and every time she chooses the non-classic choice. It’s a phenomenal read, and if you haven’t got it on your shelf then you definitely should.

Vicious tackles the idea of villains and heroes in a slightly different way. For one thing, the setting is superhero-based as opposed to fantasy. I enjoyed the way the way that you get your powers, they have a relation to how you die, as it wasn’t over-explained or overly science-ified (I can’t abide a book where you need to obtain a PhD in particle physics before you can understand what’s going on). It was grounded in ideas that you could get your head around, that were plausible and understandable, which made the whole story more believable. In truth, the setting and worldbuilding of this book beyond that fact are pretty minimal, especially if you compare it to the amount of world-building in the Shades of Magic Series. This isn’t a problem as it’s set in the ‘real world’ so you don’t need descriptions, you can fit these characters into your own world.

The story is, therefore, character driven and it is the characters that make this book the phenomenal read that it is. On Twitter and, if I recall correctly, Instagram stories, VE Schwab made a strong case for the need for a character’s motivations to be clear. I’m paraphrasing hugely but it boiled down to the idea that, unless you understand why a character is doing something you won’t care about the fact that they are doing it. I don’t know that this would apply to everyone but it is something I have started to notice in my own reading if I don’t get the motivations – I don’t tend to enjoy the book. In Vicious the character’s don’t have the typical ‘hero’ behaviours we lovers of stories know very well, so it’s even more important for the reader to comprehend why they are doing these things that most would see as morally wrong. I can’t really tell you how but VE Schwab pulls it off, I felt like I knew these characters inside and out by the end of the book and it makes all the twists and turns of the story as various plot points are revealed feel even more powerful.

I did warn you that this would get waffley.

This book plays with the idea of what makes a villain, what makes us see someone as a hero. That concept is not actually very new, I think people have been playing with morally grey characters for a long while, what this book does is it takes that idea and adds in the idea of change, the idea that someone’s ideology can warp and shift into something good or something toxic given time.

Suffice to say I loved this book if you haven’t had a chance to read it yet I urge you to do so as soon as humanly possible!

What say you? What other Superhero books do you enjoy? Let me know in the comments below!