Hello humans! As many of you may have noticed, I’m gradually working my way through reviewing the Harbinger series from Jeff Wheeler. I’ve found myself fully invested in the wellbeing of these characters and if you told me I wasn’t allowed to read the next book I’d probably cry – that’s how invested I am at this point. So I was, understandably, excited to read book three (though I did have that awkward moment where I had assumed this was a trilogy and got quite confused when the plot wasn’t resolved by the end) before the publication date on November 13th.

Probable spoilers ahead for the first two books in the series, but not for Iron Garland 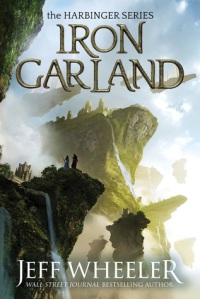 For three years, Sera Fitzempress has been a pawn in a gilded prison—the floating manor of Pavenham Sky. Disgraced and exiled from society, she has been isolated from the downtrodden she’s determined to liberate. But although Sera may seem subservient on the outside, the stubborn princess has only become emboldened.

Now in charge of her family’s estate, Cettie Pratt has grown into an independent young woman, although she continues to be tested by the high society of the clouds. Advancing in the magic of the Mysteries, Cettie is also a useful tool of defense during turbulent times. However, as more of Cettie’s mysterious past comes to light, her greatest challenge may be a reckless stranger with a dark secret.

The fog of war is drawing in, and with it comes a startling new enemy who may unravel secrets that both women would prefer stay hidden. But their secrets may be the only way to stop the coming darkness…

I always find it quite tricky to review a series, particularly one being published as quickly as this one is, I don’t just want to repeat what I’ve said in previous reviews, but it’s hard to build on them without mentioning things from before. I’ve left links to my previous two reviews above, so maybe check those out for some additional context.

A hallmark of a book in a Jeff Wheeler series is, of course, the time jump, in this case, we’re a few years ahead of the events of Mirror Gate (at least that’s how it read to me) and not only have our characters aged and changed in the meantime, but the world is now also at war. I thought this was a great way to build the stakes of this particular story, creating a new wave of excitement and some changes within society that would have been hard to engineer otherwise.

I might have actually switched favourite character over from Cettie to Sera – not something I thought would happen. This isn’t to suggest that Cettie is any less fun to read, but Sera’s story and her boldness becomes so much more compelling in this book. I always see it as a great thing when characters can shift and change in your perception as a series goes on. I thought that the way this book dealt with the fallout of Sera’s perceived disgrace at the end of the previous book was really well done, I don’t know about other readers but I felt genuinely affronted on her behalf.

I’m looking forward to a time when these two characters stories will be joined up again, at the moment it’s starting to feel like two books that have been smooshed together. It isn’t necessarily a bad thing, but I did like the friendship between these two women and I would appreciate more moments between the two of them in future books.

There is more romance in this book than I felt there was in the earlier books. Since the characters are now getting to a marriageable age it’s not too surprising and again I think it adds to the book rather than taking away from the plot. It’s another Sera and Cettie can either defy what is expected of them or it can be a way for them to use the system to their own advantage.

I find it really hard to pin down what it is that keeps me coming back to these books. I think there’s something about Wheeler’s writing that feels very nostalgic to me, like aged up children’s stories (and I very much mean that as a compliment). There’s that safe feeling that, despite everything that goes wrong, it will all come out right in the end. I suppose I’ll have to wait until May 2019 to be proved wrong with book four Prism Cloud.

I received a free digital advanced review copy of this book from the publisher via NetGalley in exchange for an honest review. All opinions are my own.

What say you? Have you read any of this series? Let me know your thoughts in the comments below!