Hello humans! Again, I know that Halloween is long past, but I don’t think I’ll ever stop wanting to read books with witches in them, sue me. So today I’m reviewing Truthwitch by Susan Dennard and if you stop by later in the week then you can read my review of the sequel Windwitch. I thought that this fantasy novel had quite a few interesting ideas, but I’m not sure that the execution was my favourite. 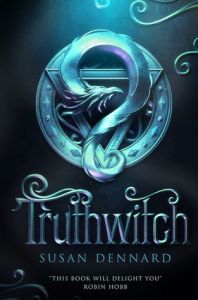 In a continent on the edge of war, two witches hold its fate in their hands.

Young witches Safiya and Iseult have a habit of finding trouble. After clashing with a powerful Guildmaster and his ruthless Bloodwitch bodyguard, the friends are forced to flee their home.

Safi must avoid capture at all costs as she’s a rare Truthwitch, able to discern truth from lies. Many would kill for her magic, so Safi must keep it hidden – lest she be used in the struggle between empires. And Iseult’s true powers are hidden even from herself.

In a chance encounter at Court, Safi meets Prince Merik and makes him a reluctant ally. However, his help may not slow down the Bloodwitch now hot on the girls’ heels. All Safi and Iseult want is their freedom, but danger lies ahead. With war coming, treaties breaking and a magical contagion sweeping the land, the friends will have to fight emperors and mercenaries alike. For some will stop at nothing to get their hands on a Truthwitch.

I like any book that includes close female friendships. It’s something that often falls to the wayside in YA fantasy since so often the narrative is focussed on the sole woman working against all odds to conquer all, which doesn’t often leave much space for anything more than a kindly maid who slips her the keys to her shackles or something similar. In this story, however, the close friendship between two women is explored in quite a bit of detail. What I thought was most interesting, is that it isn’t the case that the story focusses on one character and she happens to have a female friend, this is most certainly the stories of two women which happen to share elements. So you don’t get one female protagonist – you get two, which is no bad thing.

What is of note is that these characters don’t spend a huge amount of the book together. That’s neither a positive nor a negative in and of itself, but my personal preference would have been to have a few more moments between the two within the story, just to set up that relationship a little more clearly.

I thought that the world building was well done, it’s another one of those ‘show don’t tell’ kind of things, where you learn details of things like geography or the magic system as you go. For the most part, it does work, though I would definitely read a companion guide or something similar that goes into more detail (I’m a sucker for companion guides). I loved that ‘witch’ is a gender-neutral title in this world, as otherwise, I feel like you can get bogged down in some strange ideas about ‘Wizards vs warlocks’ and the gender divide feels very obvious at times. Instead, this felt like a levelling of the playing field, it was extremely fun to read the scenes with magic, particularly fights and battles between witches, especially given the different kinds of magic which could potentially clash.

The only reason this wasn’t a five star read for me was that I found some of the plots a bit too hard to follow. I thought that some of the pacing was a little bit off, which meant some important plot points felt skimmed over and I wasn’t quite clear on what was going on. By book two I had my bearings a bit more, but in this first book, there are so many different things going on, so many different characters all with differing motivations and backstories that it got quite muddled in my head.

I did think this was a great book, and an interesting take on the idea of witches that draws on quite a few fantasy ideas, pulling them together into something that feels very new. I finished this book wanting to read the next one – and that’s all I can ask for really!

I received a free digital copy of this book from the publisher in exchange for an honest review. All opinions are my own.

What say you? Have you read Truthwitch? Let me know your thoughts in the comments below! Don’t forget to stop later in the week for my review of Windwitch.