Hello Humans! As I promised earlier in the week, today’s review is for the sequel to Truthwitch, Susan Dennard’s Windwitch. I know a lot of people get worried about ‘sophomore slump’ in books, but more often than not I find that I enjoy sequels more than I enjoy the first book in a series. I think it’s having some of the set-up faff out of the way just lets you get into the plot in a more direct way. But that’s just me. Let’s see how this particular sequel fared. 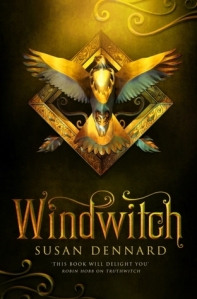 Sometimes our enemies are also our only allies…

After an explosion destroys his ship, the world believes Prince Merik, Windwitch, is dead. Scarred yet alive, Merik is determined to prove his sister’s treachery. Upon reaching the royal capital, crowded with refugees, he haunts the streets, fighting for the weak—which leads to whispers of a disfigured demigod, the Fury, who brings justice to the oppressed.

When the Bloodwitch Aeduan discovers a bounty on Iseult, he makes sure to be the first to find her—yet in a surprise twist, Iseult offers him a deal. She will return money stolen from him, if he locates Safi. Now they must work together to cross the Witchlands, while constantly wondering, who will betray whom first?

After a surprise attack and shipwreck, Safi and the Empress of Marstok barely escape with their lives. Alone in a land of pirates, every moment balances on a knife’s edge—especially when the pirates’ next move could unleash war upon the Witchlands.

I find it quite amusing that in my review of Truthwitch I wanted Iseult and Safi to have been together more when in this book I thought that it was the separation of the two characters that made the story so much stronger. I found myself engrossed in both of their stories, where normally I find myself willing one to be done with so I can get to the one that I like (nobody’s perfect). But no, all of the perspectives in this book are really interesting and compelling and I was surprised by how invested I got in quite a quick time.

I found the writing very evocative in this book, in a way that perhaps I just didn’t notice in Truthwitch. There are moments of description, particularly in Merik’s story, where I could absolutely feel myself there with him. But there are moments like that dotted throughout. I’m wondering if it’s something to do with the fact that there are a wider range of settings these characters find themselves in, from forest to ocean to subterranean worlds and more, so perhaps I noticed the distinction between them more? I’m not sure. Either way, it works, this book really drops you into the moment with these characters.

My favourite storyline was, of course, that of Iseult and Aeduan because I am someone who sees two enemies being forced together and just eats it up. It’s one of my favourite tropes and I know that it can be quite problematic and in some cases is a bit overdone, but either I’m weak-willed or it worked hugely well in this context. There’s something about managing that tension, and also the way that relationships are forced to shift and change in the face of adversity that gets me right here.

I thought that this was an incredibly strong sequel. There is also a character who, while it’s never said they are transgender within the book, exhibits some elements of that storyline. He is misgendered, but it’s addressed within the story and I thought it was handled quite well, though obviously that was my own reading of it, and a person who is transgender may disagree with me.

I’m left feeling pretty excited about Bloodwitch, which comes out in 2019. If you’re looking for a fantasy novel that explores magic users and seems to be growing and gaining momentum (if this book is anything to go by) then I would recommend this series.

I received a free digital advanced review copy of this book from the publisher via NetGalley. All opinions are my own.

What say you? Which witchy books should I read while waiting for Bloodwitch? Let me know in the comments below!