Hello humans! It is once again the time of the week where I scour my ‘Want to Read’ shelf on Goodreads and pick one book to talk about. Now that we’re closer to the end of the year I feel a bit less weird talking about 2019 releases so here’s a book that I think I found in a thread of recommendations on twitter! 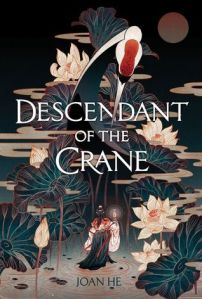 Tyrants cut out hearts. Rulers sacrifice their own

Princess Hesina of Yan has always been eager to shirk the responsibilities of the crown, but when her beloved father is murdered, she’s thrust into power, suddenly the queen of an unstable kingdom. Determined to find her father’s killer, Hesina does something desperate: she engages the aid of a soothsayer—a treasonous act, punishable by death… because in Yan, magic was outlawed centuries ago.

Using the information illicitly provided by the sooth, and uncertain if she can trust even her family, Hesina turns to Akira—a brilliant and alluring investigator who’s also a convicted criminal with secrets of his own. With the future of her kingdom at stake, can Hesina find justice for her father? Or will the cost be too high?

In this shimmering Chinese-inspired fantasy, debut author Joan He introduces a determined and vulnerable young heroine struggling to do right in a world brimming with deception.

Doesn’t that just sound amazing? It doesn’t come out until April 2019 but you can bet it’s going straight onto my preorder list!

What’s new on your Want to Read list? Let me know in the comments below!