Hello Humans! I was delighted to have been sent a copy of Shelley Sackier’s new book The Antidote from the publisher, it’s always fun to get bookmail, especially since it means I get to share my thoughts with you all a little early (I think I just missed the pub date on this one but I blame me for having a wonderful birthday so I’m not planning on beating myself up about it).  The Antidote is one of those books that I can see a lot of people liking, it’s got a lot of different elements that could appeal to a number of different people – so let’s not tally – on with the review! 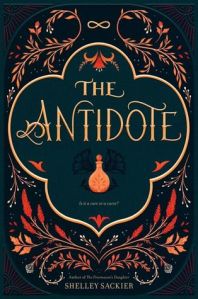 Magic is not allowed, under any circumstances — even if it could save someone’s life. Instead, there are herbal remedies and traditional techniques that have been painstakingly recorded in lieu of using the mystical arts. Fee knows this, so she keeps her magic a secret.

Except her best friend, Xavi, is deathly ill. He’s also the crown prince. Saving him is important, not only for her, but for the entire kingdom.

Fee’s desperation to save her friend means she can barely contain the magic inside her. And after the tiniest of slips, Fee is thrust into a dark and secretive world that is as alluring as it is dangerous.

If she gives in, it could mean she can save Xavi. But it also means that those who wish to snuff out magic might just snuff her out in the process.

Forbidden magic is a huge yes for me, provided it’s done well. I can’t abide it when it really gets in the way of the plot, but when it works with the plot I think it can be a really good tool. In this case, for the most part, it works with the plot, largely because Fee (our character with magic) is so isolated from the rest of the world that it isn’t a case of constantly hiding the magic, more monitoring when she uses it. Since this is such a huge plot point for the world in which this story takes place I am very glad that this was done well.

I thought that the plot for this book was, mostly, very good. It got much better towards the end of the book, where some of the big plot reveals began to come in, I could have done with somewhat tidier plot/worldbuilding in the earlier parts of the book but it was certainly not bad, just a little confusing at times. It’s always difficult to work out complex political relationships between nations, especially when your main characters don’t have a good reason to totally understand it themselves.

Overall, I think this book was good. It has some great moments and there are some great descriptive parts of the prose, you can really tell which bits tie into what Sackier really wanted to write about, the plant lore and the healing, in particular, are the shining stars of the whole book. I’m not sure that the plot did enough new things for me to rank it above similar titles (The Sineater’s Daughter has a similar vibe, for example) but if you’re less widely read in this genre I think this could be a fabulous place to start.

If you’re looking for a way to get into this genre, or for something to recommend to a friend who isn’t sure then I would say that this is a great option, for  me (who reads more YA than most people ought to) I’m not sure it was innovative enough to really pack a punch – but I did have a good time reading it and at the end of the day that’s what’s important.

I received a free copy of this book from the publisher in exchange for an honest review. All opinions are my own.

What say you? Will you be reading The Antidote now that it is on shelves? Let me know in the comments below!