Hello Humans! A bit of a break from the fantasy reviews on which I’ve been focussing of late. The eagle-eyed among you will recall my review of One Way back in September of last year. Well, the delightful people at Gollancz sent me a copy of the sequel to review – how did No Way hold up against its predecessor? 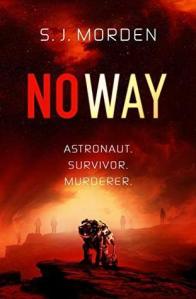 In the sequel to the terrifying science fiction thriller, One Way, returning home from Mars may mean striking a deal with the very people who abandoned him.

They were sent to build a utopia, but all they found on Mars was death.

Frank Kitteridge has been abandoned. But XO, the greedy–and ultimately murderous–corporate architects of humanity’s first Mars base made a costly mistake when they left him there: they left him alive. Using his skills and his wits, he’s going to find a way back home even if it kills him.

Little does he know that Mars isn’t completely empty. Just over the mountain, there’s another XO base where things are going terribly, catastrophically wrong. And when the survivors of that mission find Frank, they’re going to want to take even the little he has away from him.

If there’s anything in Frank’s favor, it’s this: he’s always been prepared to go to the extremes to get the job done. That’s how he ended up on Mars in the first place. It just might be his ticket back.

Books like this make me severely anxious. That’s not a criticism of the book – more of an indication of how well Morden sets up the many threats throughout this story. I find the idea of living on a planet where at any moment you could suddenly be unable to breathe ridiculously claustrophobic. Throughout this book I found myself holding my breath, in part because of the tension but mostly just because I was so nervous about being able to breathe.

So, it’s safe to say this book is pretty thrilling.

Unlike One Way you get less of Frank’s past in this book. Where book one was introducing him as a character and how he had ended up on Mars, this book is more about how Frank is surviving in this particular situation: the choices he makes and the choices that are taken away from him. I think this works really well as another book of angsty Frank might have bothered me – this book is more about the external than the internal.

As ever with this kind of book, I can’t speak to the accuracy of the science. What I will say is that it felt like good science. It made sense to me, though I am most certainly not a scientist. But things are logical and even those things that we obviously don’t have yet felt plausible – feel free to correct me if you’re a scientist who has read this!

Overall, I enjoyed reading this book. Much like One Way, I don’t know that I’d be overly keen to re-read it any time soon (if only for the good of my lungs) but I would absolutely recommend it to any of my friends who enjoyed books like The Martian but want things to be even more deadly.

A great palette cleanser if you’re feeling a little stagnated in your genre – I personally think both of these books are well worth reading.

There are some content warnings that I think would be spoilers so feel free to contact me if you’re looking to find something specific.

No Way is available now!

What say you? Will you be reading this? What are some of your favourite science fiction books? Let me know in the comments below.