Hello Humans! Today I’m reviewing a book that I, like many, managed to snag in the March Fairyloot box. As you can imagine, I was quite pleased to get Viper as the other book was To Best the Boys and, while I love the cover, I wasn’t particularly enamoured with the book itself. But I had high hopes for Viper after having had it hyped up by Asha over at A Cat, A Book and A Cup of Tea and it felt about the right time for a good old fashioned seafaring adventure! 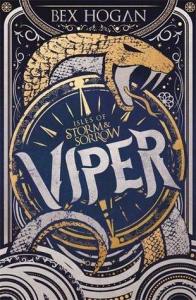 He will make me a killer.
Or he will have me killed.
That is my destiny.

Seventeen-year-old Marianne is fated to one day become the Viper, defender of the Twelve Isles.

But the reigning Viper stands in her way. Corrupt and merciless, he prowls the seas in his warship, killing with impunity, leaving only pain and suffering in his wake.

He’s the most dangerous man on the ocean . . . and he is Marianne’s father.

She was born to protect the islands. But can she fight for them if it means losing her family, her home, the boy she loves – and perhaps even her life?

A brave heroine. An impossible dilemma. An epic new fantasy trilogy set on the high seas.

I was expecting to find that this book had been overhyped, that I would find myself utterly dissapointed. I am delighted to say that wasn’t even close to being the case. This book was utterly amazing, far better than I could have ever imagined.

For a start, this book was far darker than I would have thought. There are some quite graphic descriptions of various torture methods that at times had me physically recoiling from the page they were so well done. I won’t spoil anything for you but the other thing I will say is that this book isn’t afraid to put its characters through the wringer. Do not go in expecting a friendly seafaring story or you may find yourself coming out a little shellshocked. This was the main way in which this book defied my expectations. I think this was really well handled. It didn’t feel like violence or tragedy for the sake of it, more like this was a genuine depiction of what happened to these characters and it is just horrible at times.

What this book manages to do, which I talk about in reviews a fair bit, is it manages to balance out the good and the bad. There are these moments where everything is so horrible, but that isn’t the whole book. There are also some truly positive moments and some real breakthrough character moments tied up within the plot that kept it from feeling unnecessarily bleak as well as ensuring that those moments of sadness had some contrast. A well-balanced book is something we can all love.

I thought that Marianne was a great character, I hugely enjoyed reading her perspective, though there are some side characters who I hope will get a bit of additional page time in later books in the series. Marianne is written as such a lonely person but still manages to feel like someone with whom you might want to be friends (I mean, she would absolutely end up beating me up but I can dream).  With relatively few characters who are what one might consider morally ‘good’, I found Marianne impressively interesting despite her goodness.

Romance, it is something of an unavoidable factor, isn’t it? This book has a fairly nice slow burn romance in it that I have no doubt will build into something more complex in later books – I thought that it was handled in a good way. It manages to avoid any particularly clichéd aspects while still feeling comfortable and familiar in terms of YA fantasy tropes.

This book definitely delivers on its promises. It gives you the grit and the glamour of seafaring and promises to be the start of a truly spectacular series that I will certainly devour. For anyone needing a fix after reading such amazing books as Daughter of the Pirate King I would have to say that Viper makes a great read!

Viper is out in the UK in April 18th!

What say you? Will you be reading Viper? Let me know your thoughts in the comments below!