Hello Humans! It is book three of my #ABookADay reading challenge and, by pure chance, it’s another one of my many impulse Kindle purchases. Many of you will know I adore Jay Kristoff’s Nevernight series – to the point where I now have three copies of Darkdawn preordered…but I hadn’t ever really thought to read his The Lorus Wars series – mainly because no one talks about them. But the first one was on offer and I thought why not give it a go?

I guess we’ll find out…

Arashitoras are supposed to be extinct. So when Yukiko and her warrior father Masaru are sent to capture one for the Shõgun, they fear that their lives are over – everyone knows what happens to those who fail the Lord of the Shima Isles. But the mission proves less impossible and more deadly than anyone expects. Soon Yukiko finds herself stranded: a young woman alone in her country’s last wilderness, with only a furious, crippled arashitora for company. Although she can hear his thoughts, and saved his life, all she knows for certain is he’d rather see her dead than help her. Yet trapped together in the forest, Yukiko and the beast soon discover a bond that neither of them expected.

Meanwhile, the country around them verges on collapse. A toxic fuel is choking the land, the machine-powered Lotus Guild is publicly burning those they deem Impure, and the Shõgun cares for nothing but his own dominion. Authority has always made Yukiko, but her world changes when she meets Kin, a young man with secrets, and the rebel Kagé cabal. She learns the horrifying extent of the Shõgun’s crimes, both against her country and her family.

Returning to the city, Yukiko is determined to make the Shõgun pay – but what can one girl and a flightless arashitora do against the might of an empire?

Oh no. Ok, so…when I read chapters 1-3 I was close to not reading the rest of the book. In fact, if it wasn’t part of this reading challenge I might have been tempted to DNF. I suppose I should caveat this review with the fact that this book first published in 2012 and publishing has come on a long way in terms of promoting Own Voices works and condemning things that are more…culturally appropriative.

The first three chapters of this book put my hackles up, I was hugely aware that this was a white male author writing an Asian inspired fantasy world and, quite rightly, that didn’t sit comfortably to me.

I decided to keep reading for three reasons:

I’m quite glad I did keep reading because this is, at least so far, a good book. I mean it’s got some fairly clichéd things in it but there are also some cool worldbuilding elements. I think it needs to be made clearer in the earlier chapters that this is more of an industrialised setting, this isn’t just a fantasy novel, there’s certainly something more to it than that – which I appreciate.

So yes, this whole readalong will probably be caveated by the knowledge that this book probably wouldn’t be published today – or if it were I don’t think it would be particularly well received by the bookish community – the need for elevating ownvoices stories is more important and more valuable.

Yeah, my feelings were smack bang on the money. The plot of this book is good and interesting and it’s not badly written it’s just not particularly well researched and feels a bit like all it needs is a naruto headband to truly become its final form. Maybe that’s overly harsh? Then again, having read a few own voices reviews maybe not harsh enough?

It’s frustrating because I still like Kristoff’s dialogue and his characters, the man can write a likeable talking animal what can I say? So yeah, I’m half-way through and I am enjoying the reading experience but only if I shut off my ‘white man writing fantasy’ senses and just ignore the nuances – which isn’t how anyone ought to read in this day and age…

Yeah, the only way I was finishing this was powering through to the end – sorry not sorry. I won’t say this was a difficult book to read, to be honest at times I was pretty darned entertained. But it feels somehow older than it is. Were we done with love triangles by 2012 or were they still in force? I was sitting exams in 2012 so I honestly can’t remember.

It is, as expected, a big cliffhanger ending but, unless they fall into my lap, I’m unlikely to read the rest of this series.

Jay Kristoff can write compelling characters and interesting worlds, of that I have no doubt. But I’ve found I enjoy his current work far more than this book – I think it’s a great example not only of how a writer can change and develop but also how publishing has changed and should continue to change in favour of own voices narratives, particularly when it comes to books so clearly inspired by real-world cultures. You only have to look at the Goodreads page to understand the frustration of readers at the lack of research and sensitivity in parts of this book and, while the plot may be exciting, it doesn’t make up for shoddy representation. 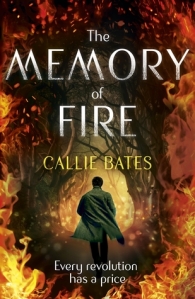 Fabulous! For some reason, all of my Kindle reads are coming through first! The Memory of Fire is a sequel I picked up in a sale, as I always do. I honestly can’t remember much of what happened in The Waking Land but as this follows a different character I think I’ll be ok!

What say you? Have you read the other books in The Lotus Wars? Let me know your thoughts in the comments below!