Hello Humans! Have you ever wanted telekinetic powers (or a variation thereof)? Well, today’s book might be enough to put you off for good! I’ll confess I was mainly moved to request a review copy of this book based on the title – who wouldn’t be intrigued by that – and this book pretty much gives you exactly what it says on the tin. 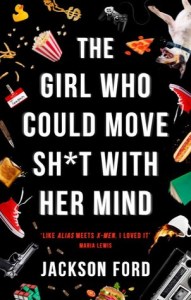 Teagan Frost is having a hard time keeping it together. Sure, she’s got telekinetic powers — a skill that the government is all too happy to make use of, sending her on secret break-in missions that no ordinary human could carry out. But all she really wants to do is kick back, have a beer, and pretend she’s normal for once.

But then a body turns up at the site of her last job — murdered in a way that only someone like Teagan could have pulled off. She’s got 24 hours to clear her name – and it’s not just her life at stake. If she can’t unravel the conspiracy in time, her hometown of Los Angeles will be in the crosshairs of an underground battle that’s on the brink of exploding . . .

Full of imagination, wit, and random sh*t flying through the air, this insane adventure from an irreverent new voice will blow your tiny mind.

I’m going to start by saying the censorship in all of the summaries, titles and reviews has me chuckling – every time I see it I have a little smile.

Anyway, on to the book.

I really liked Teagan, she felt like a grown-up version of every messed up YA heroine with superpowers (I particularly felt she resonated with Maximum Ride but that’s a comparison I draw often). I actually think this would be a good transitional book for those wanting to move from YA into more adult supernatural fiction but who aren’t sure where to start. This book has more violence and more swearing but other than that it could read as YA pretty easily with just a few age changes. So, if you’re looking to read more adult fiction alongside your YA addiction (like me) then I would recommend this.

What I liked about the set up for this book is that, while it was a little cheesy, it managed to walk the line of ‘no-one can know about her powers’ without it becoming unbelievable or silly. I’ll never forget reading a spy book about a new mother whose partner didn’t know she was an assassin who hid a gun in her bathroom cupboard on the grounds that he never looked there. This book doesn’t do that, in part because it takes place over such a short amount of time – just a couple of days – so there isn’t time to get bogged down in how these people, this crew, is integrated with society, they just get on with the situation at hand.

I haven’t read a good ‘murder mystery turns into an action story’ book in a while and it was nice to step back into the genre. I thought that the mystery was well done, with a good amount of red herrings and backstabbing – again without feeling too cheesy.

I’ll be interested to hear from people who know more about these things, what they felt about the representation of people who are homeless was like. It’s obvious that this author really loves LA – where the book is set – but is also aware of the ‘faults’ of the city. I knew shamefully little about Skid Row and this book prompted me to do some research. There are some other topics onto which this book sheds light – that I can’t go into here because it would be a spoiler – but I did appreciate that the story encouraged you as a reader to go out and learn more about things – that’s always a sign of a good book as far as I’m concerned.

I was left feeling eager to read the sequel – I definitely want to see what happens next for these characters!

What say you? Would you read this? Let me know your thoughts in the comments below!

One thought on “The Girl who Could Move Sh*t with her Mind, Jackson Ford – Book Review”