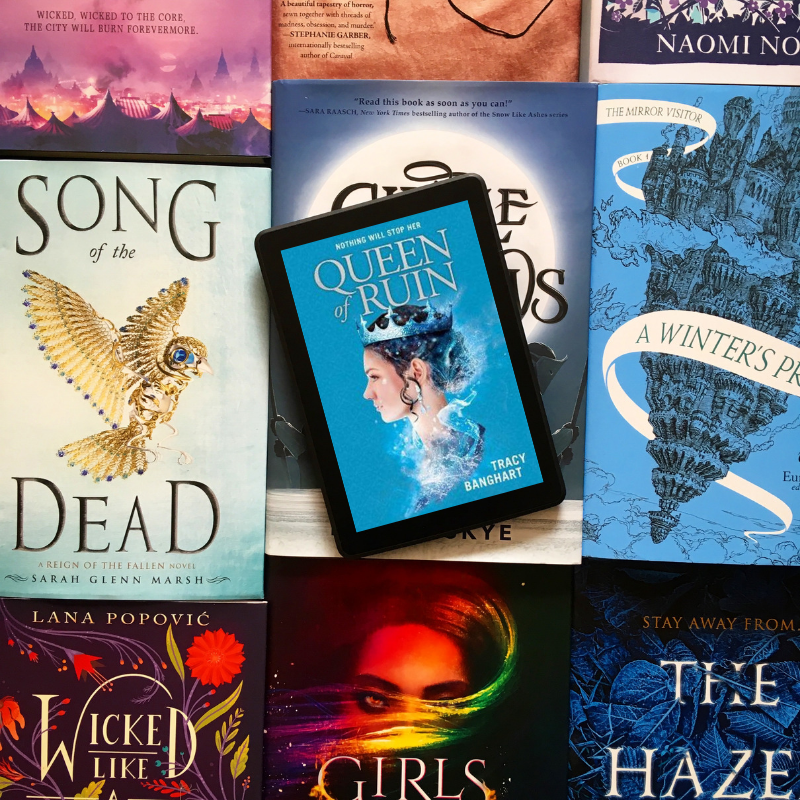 Hello Humans! It’s day fourteen of my book a day challenge as I’m writing this and I finally accepted I needed to also read arcs and loans – despite my original plan to only read my owned TBR. For whatever reason, it panics me to see review copies piling up, while I can quite happily watch my owned TBR grow without thinking about the consequences at all – strange brain things.

Last year I read and reviewed Grace and Fury which was a solid YA novel from Tracey Banghart. I enjoyed the sibling relationship – despite the fact that the sisters were so far apart for pretty much the entire book – and I ended up giving it four stars, in fact, the Fairyloot copy is still on my hardback shelf. So, when the opportunity arose to read and review the second book Queen of Ruin I jumped at the chance to see where this story went. As far as I am aware this is the final book, making this a duology.

Banished by Asa at the end of Grace and Fury, Nomi and Malachi find themselves powerless and headed towards their all-but-certain deaths. Now that Asa sits on the throne, he will stop at nothing to make sure Malachi never sets foot in the palace again. Their only hope is to find Nomi’s sister, Serina, on the prison island of Mount Ruin. But when Nomi and Malachi arrive, it is not the island of conquered, broken women that they expected. It is an island in the grip of revolution, and Serina–polite, submissive Serina–is its leader.

Betrayal, grief, and violence have changed both sisters, and the women of Mount Ruin have their sights set on revenge beyond the confines of their island prison. They plan to sweep across the entire kingdom, issuing in a new age of freedom for all. But first they’ll have to get rid of Asa, and only Nomi knows how.

Separated once again, this time by choice, Nomi and Serina must forge their own paths as they aim to tear down the world they know, and build something better in its place.

The stakes are higher and the battles bolder in Tracy Banghart’s unputdownable sequel to Grace and Fury.

I remember finding the oppressive world these characters lived in interesting and powerful back when I read Grace and Fury. I think this second book doesn’t quite have the same impact for two reasons:

So yes, it’s still a powerful setting and certainly an idea that can and should be explored, particularly in YA fantasy (since so many similar books are adult dystopian) – but without the lingering sense of the first book, it just doesn’t hit quite so hard as it did in book one.

The romance – oof. In my review for Grace and Fury I said the following:

I kind of felt similarly in this book. I mean, it’s less bad. Certainly, there seems to be a greater focus on actually getting things done as opposed to the falling in love portions of the story. But then maybe there needed to be more meaningful non-romance based interactions between the characters? I don’t know. If I’m reading a book where they’re in an inn and there’s only one bed and I’m not enthused…hmm.

I’m coming across very negative when, in all honesty, I don’t think this is a bad book. I think it’s maybe the case that this could have been a trilogy, we could have had a little more time to get to know these characters, to build a bit more of a rapport with some of the supporting cast, to get a better sense of the two worlds and the people living in them – or maybe that’s on me, maybe this book needs to be read close to the first book in order to maintain that connection with the characters?

But yes, in terms of empowerment and suchlike I think this book, this series, is a good starting point. I think it’s a good place to begin asking the kind of questions we should be asking about female empowerment and such. But I don’t know if this book ticked all my boxes when it comes to what I would consider ‘feminist fiction’ – which is one of the ways in which this book is being marketed. I firmly believe that to call a book feminist and to celebrate it for being so, a book has to be openly and explicitly intersectional. This book achieves that at times, bringing in characters of colour as well as some mentions of queer characters – but for me, that felt more of a whisper when I wanted it to be a roar.

Overall, I enjoyed this book, and it’s quite possible that I’m being overly harsh purely because I have very high standards when it comes to books that feature these kinds of ‘women rising up’ stories. Thinking about it, I demand more of them than I might a book that was written by a white man about a white man – that’s probably my own failing.

I ended up giving this book three stars, my rating for ‘I enjoyed this but I don’t think it was my ideal read’.

I received a free digital advanced review copy of this book from the publisher, all opinions are my own.

Queen of Ruin is out July 11th!

What say you? Will you be reading this book? What makes a book ‘feminist’ for you? Let me know in the comments below!