Hello Humans! I know I’ve said it before, but this time I mean it – I am devastatingly behind on writing book reviews! After reading a book every day in June I just lost all motivation to sit and write – we also moved house which might have something to do with it!

But I’m back – I’m on holiday and I’m chained to my laptop until I get these things written – so keep an eye on the blog over the next few weeks because I’ve been reading some amazing books!

Today I’m reviewing An Illusion of Thieves, the first book in an adult epic fantasy series, the premise of which really caught my eye! I’m a bit of a sucker for forbidden magic of any sort so I was intrigued as to whether this book would manage to do anything differently? 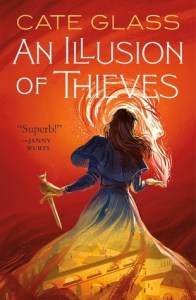 In Cantagna, being a sorcerer is a death sentence.

Romy escapes her hardscrabble upbringing when she becomes courtesan to the Shadow Lord, a revolutionary noble who brings laws and comforts once reserved for the wealthy to all. When her brother, Neri, is caught thieving with the aid of magic, Romy’s aristocratic influence is the only thing that can spare his life—and the price is her banishment.

Now back in Beggar’s Ring, she has just her wits and her own long-hidden sorcery to help her and Neri survive. But when a plot to overthrow the Shadow Lord and incite civil war is uncovered, only Romy knows how to stop it. To do so, she’ll have to rely on newfound allies—a swordmaster, a silversmith, and her own thieving brother. And they’ll need the very thing that could condemn them all: magic.

This book was a bit of a mixed bag for me, I really liked Romy, I thought it was an interesting variation on the standard ‘courtesan to the king’ (here it’s a shadow lord but the dynamic is similar). Where most of the time you experience the arc all the way from first meeting the king and being a shy delicate thing to eventually gaining his love and transforming the kingdom. In this case, Romy is already at the end of that journey (though love is perhaps too strong of a word, depends on your interpretation). I liked that Romy was strong from the off, she’s ready to get things sorted and while she has character flaws she is very aware of them and actively attempts to do something about them in the course of the book. It was an emotional awareness that you don’t always see in fantasy fiction.

I also thought this book handled the fact that the main character was at one point a sex worker quite well. While Romy is clear that she doesn’t want to be a prostitute after leaving the Shadow Lord’s court, it isn’t written to shame sex workers. I was pleasantly surprised as I’ve come to expect nothing but ‘whores are bad’ from fantasy fiction and this felt like a somewhat more nuanced take.

I wouldn’t say this had the kind of magic system that my five-star reads tend to have – I like a bit more ‘science’ behind it, I love to really understand how magic works and why certain people have it. This was more of a ‘some people have some powers and those powers vary’ which is totally fine – just not my preference. I know some people prefer to not get bogged down in the particulars of a magic system so I suppose it depends on which end of the spectrum you find yourself.

Now onto the things that I found…less wonderful? I personally didn’t find the plot in the first half of the book particularly compelling. To oversimplify it, this is basically just Romy rehabilitating her layabout brother. Perhaps it’s just me, but I have very little patience for reading about men who don’t want to improve. It felt like Romy’s plot and feelings were just there to fix her brother and it felt a little eye-roll-y to me. Again, that’s personal preference and you may love that aspect of the story. For me, it was the second half/last third of the book where things got more ‘heisty’ that I actually enjoyed. If the whole book had been Romy’s brother I think I would have stopped reading.

As I say, the latter part of this book is much better and has some excellent moments of heist within it. Is it strong enough to make up for a somewhat lacklustre start? I think you’ll have to decide that for yourself. But I do think this has ‘second book potential’, by which I mean I think the sequel, where all of the world-building has been done and the characters are more established, has the potential to be something really good.

So, did An Illusion of Thieves, manage to defy the somewhat cliché premise? I’d say it does to a degree. I liked a lot of the aspects of this book, in particular Romy. I wouldn’t say it is revolutionising the genre but I think this is a strong start. It’s the kind of book I can see myself reading on a long train journey and thoroughly enjoying as a way to pass the time.

I received a free advanced copy of this book from the publisher. All opinions are my own.

An Illusion of Thieves is available now

What say you? Will you be reading An Illusion of Thieves? Let me know your thoughts in the comments below!

5 thoughts on “An Illusion of Thieves, Cate Glass – Book Review”