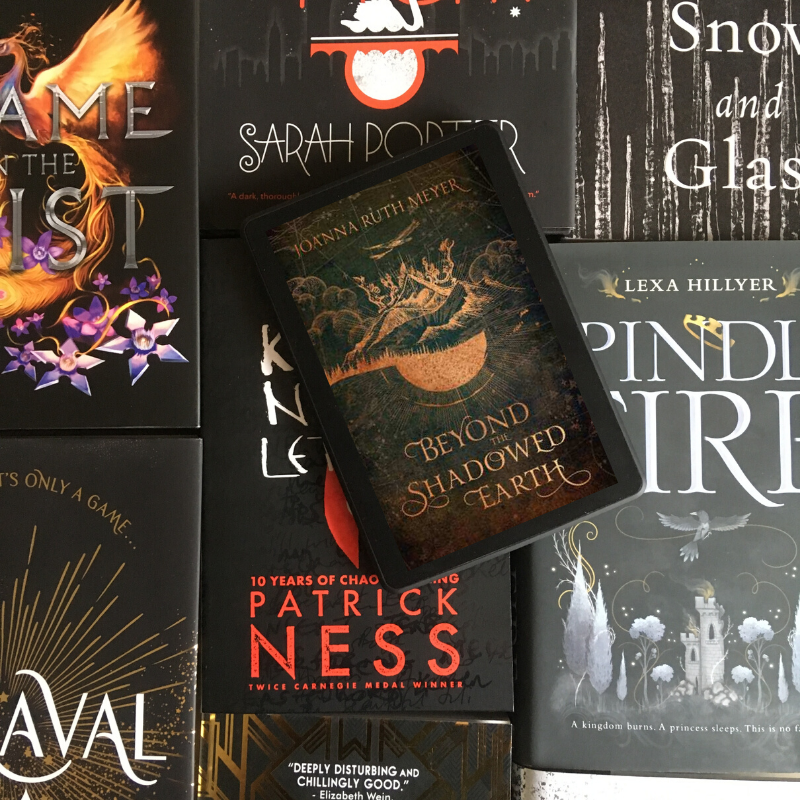 Hello Humans! I did mean it about the January releases, next up is Joanna Ruth Meyer’s Beyond the Shadowed Earth, which is set in the same world as (but is not a direct sequel to) Beneath the Haunted Sea. I actually haven’t read anything by Joanna Ruth Meyer before – I had wanted to read Echo North last year but never ended up picking up a copy, so this was an exciting opportunity to check out a new author!

It has always been Eda’s dream to become empress, no matter the cost. Haunted by her ambition and selfishness, she’s convinced that the only way to achieve her goal is to barter with the gods. But all requests come with a price and Eda bargains away the soul of her best friend in exchange for the crown.

Years later, her hold on the empire begins to crumble and her best friend unexpectedly grows sick and dies. Gnawed by guilt and betrayal, Eda embarks on a harrowing journey to confront the very god who gave her the kingdom in the first place. However, she soon discovers that he’s trapped at the center of an otherworldly labyrinth and that her bargain with him is more complex than she ever could have imagined.

I usually love a book that chooses to have a morally grey (or outright villainous) main character, so this definitely caught my eye, I was excited to find another book, perhaps one that might remind me of Empress of a Thousand Lanterns?

Unfortunately, this book didn’t quite hit the mark for me, and managed to push a few of my ‘I just don’t like it when’ buttons.

This is most definitely a ‘blink and you’ll miss it’ kind of a book, I had a hard time keeping focussed on the story and I’d have to read pages over a couple of times to get a handle on what was happening, and I’m still not sure I could explain exactly what happened now that I’ve finished the book. That could always have partly been due to the mood I was in when reading (it was over Christmas after all) but just to warn potential readers to focus in when picking this one up.

My biggest problem with the story was the decisions that Eda made, I really wanted to like Eda as a character, because of course I love to read ambitious main characters, but Eda kept consistently making really rubbish choices and it was incredibly frustrating.

Let’s be clear, I don’t mean that characters should only make good choices, in fact, I think it’s better when characters make mistakes. But when a character does something that, to the reader, is very clearly a bad choice (the best example I can give is a spoiler so you’ll just have to trust me on this one) I want to be able to rationalise why they made that decision. If I can understand either their motivation or the context in which they are making that choice then I can get on board and when the bad consequences come they don’t feel quite so stupid. In this instance, I didn’t feel as though I had that with Eda, so instead of feeling for her, I sort of just felt like she deserved what she got (does that make me a bad person?).

There are some world-building elements in this story that I liked, the idea of the Gods was interesting, so perhaps I will check out Beneath the Haunted Sea in the future, but I don’t know that I will be re-reading this particular book in the future. I think it will appeal to some but not to all.

I received a free digital advanced review copy of this book from the publisher, all opinions are my own.

Have you read this? Let me know your thoughts in the comments below!