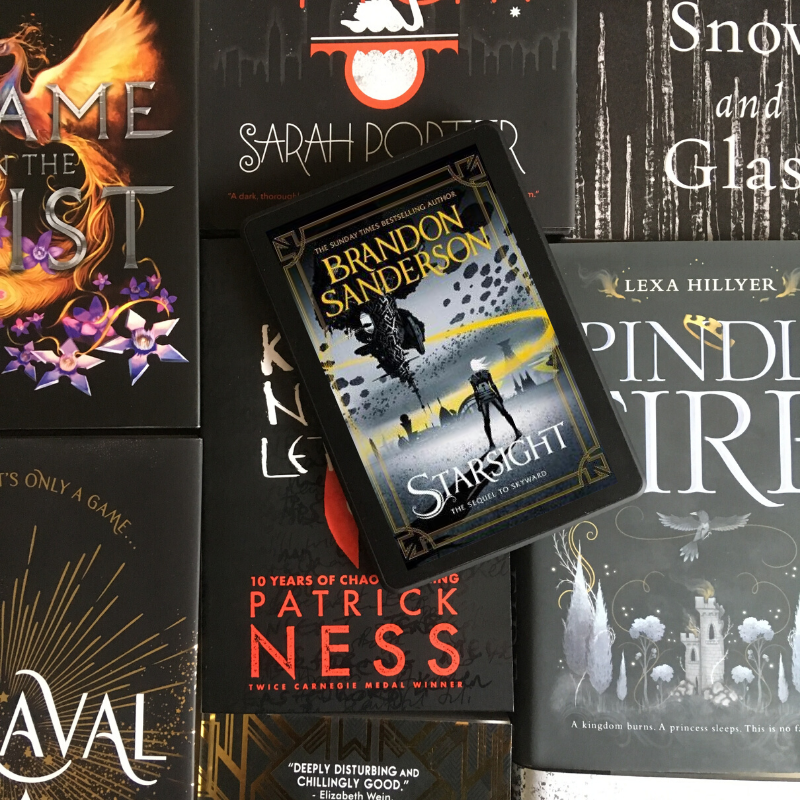 Hello Humans! It’s finally time to review one of my most anticipated releases of 2019 – Brandon Sanderson’s Starsight. I had read Skyward the year before and had been eagerly anticipating the sequel so the moment my preorder came in I was down at the bookshop clutching that new hardback to my chest! But could it live up to my high expectations?

All her life, Spensa has dreamed of becoming a pilot. Of proving she’s a hero like her father. She made it to the sky, but the truths she learned about her father were crushing.

Spensa is sure there’s more to the story. And she’s sure that whatever happened to her father in his starship could happen to her. When she made it outside the protective shell of her planet, she heard the stars–and it was terrifying. Everything Spensa has been taught about her world is a lie.

But Spensa also discovered a few other things about herself–and she’ll travel to the end of the galaxy to save humankind if she needs to.

One thing that struck me about Starsight is just how different it felt from Skyward, the main character is still Spensa, of course, and it has the same tone and energy as book one, but the setting and plot feel vastly different. Where book one contains (pretty much) only humans, this book catapults you into a wider alien society, suddenly you’re out in the universe and realising, alongside Spensa, just how small the world of Skyward was. I really enjoyed this, I think it was a brave choice (effectively throwing out almost every side character readers got to know previously) and one that paid dividends, this book feels fresh, it’s as exciting and vibrant as the first book was and I’m thrilled to see this universe unfolding.

I thoroughly enjoyed the worldbuilding, or should I perhaps say ‘culture-building’ in this story, Sanderson manages to capture a range of Alien creatures that don’t just feel ‘like humans but a bit weird’, you get a real sense of beings with a totally different biology, it feels like there are different natural laws at play and it just works. What I particularly liked is this doesn’t feel othering (or at least it didn’t to me). Spensa recognises that these beings are something other than human, but it isn’t just her saying ‘oh how weird’, it was more reflective than that, appreciating that one person (or alien)’s experience can be drastically different from another in practically every way, and that part of the beauty of thinking about the future is that you can write interactions between those different experiences. I was particularly taken by a few characters, and feel free to ask me about them in the comments, but I’ll keep my lips zipped up here because I want to let people discover things for themselves.

One thing I have loved about Brandon Sanderson’s writing (I have yet to read a lot of his work so my experience is somewhat limited) are the ‘ah-ha!’ moments he writes into his stories. I found that this book didn’t have that, at least not in quite so impactful of a way as book one did. It’s that which really made this feel like the second book in a series. That’s not to say this book doesn’t have reveals and puzzles solved, but they do feel more like a single moving piece rather than the entire solution. Still great writing, but did leave me hungering for book three!

Essentially, this book is fantastically fun, as fun (if not more) than Skyward, and is very clearly building to an epic next book. I recommend this series to pretty much everyone- so here I am wholeheartedly recommending it to you.

Starsight is out now!

What say you? Have you read this series? Which Brandon Sanderson book should I read next? Let me know in the comments below!