Bit of a tangent here so skip to below the summary if you want the actual book review!

I’m one of, I suspect, many women who have gnarly memories of feeling like an ugly duckling as a teenager. I’m pretty sure I’m a decent enough human being at this point but at age fifteen I felt I surely must be the weirdest most unpleasant, graceless being ever to exist. You know, normal things. I also used to do a lot of theatre when I was in my mid-late teens which…didn’t exactly help. Don’t get me wrong, I had a great time and I wouldn’t change the experiences for the world, but I was almost always cast as the weird ‘other woman’ character. I played Agnes in David Copperfield, Margot in Diary of Anne Frank* and I eventually drew the line at playing the ‘other woman’ when they asked if I would come and play Mary Bennet. That was my line in the sand, I was done playing these characters (or historical figures) who, it seemed to me, existed within the play to demonstrate how wonderful the other woman/women were in comparison.

Now I’m older not only do I see the huge value in my own weirdness (I use that word with immense pride) but I’m also fiercely advocating for these characters to not only exist but to get the stories they deserve. Give unto me the socially awkward heroines.

With that in mind, it should come at no surprise that I leapt at the opportunity to read The Other Bennet Sister!

*Something that in hindsight really makes me cringe and if I could go back I would give both myself and the production team a bit of a shake and an education in what OwnVoices means. 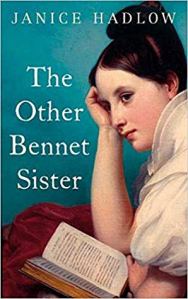 Mary, the bookish ugly duckling of Pride and Prejudice’s five Bennet sisters, emerges from the shadows and transforms into a desired woman with choices of her own.

What if Mary Bennet’s life took a different path from that laid out for her in Pride and Prejudice? What if the frustrated intellectual of the Bennet family, the marginalized middle daughter, the plain girl who takes refuge in her books, eventually found the fulfillment enjoyed by her prettier, more confident sisters? This is the plot of The Other Bennet Sister, a debut novel with exactly the affection and authority to satisfy Austen fans.

Ultimately, Mary’s journey is like that taken by every Austen heroine. She learns that she can only expect joy when she has accepted who she really is. She must throw off the false expectations and wrong ideas that have combined to obscure her true nature and prevented her from what makes her happy. Only when she undergoes this evolution does she have a chance at finding fulfillment; only then does she have the clarity to recognize her partner when he presents himself—and only at that moment is she genuinely worthy of love.

Mary’s destiny diverges from that of her sisters. It does not involve broad acres or landed gentry. But it does include a man; and, as in all Austen novels, Mary must decide whether he is the truly the one for her. In The Other Bennet Sister, Mary is a fully rounded character—complex, conflicted, and often uncertain; but also vulnerable, supremely sympathetic, and ultimately the protagonist of an uncommonly satisfying debut novel.

This book is split into a number of parts, the first of which covers the events of Pride and Prejudice but from Mary’s perspective. Seeing this story through Mary’s eyes it’s almost painful (especially if you come with all the baggage I do), it all feels stupendously unfair and Mrs Bennet’s obsession with looks and with finding wealthy husbands is all the more difficult to stomach. I disagree with some other reviewers who have said that this book doesn’t feel like the original characters. I think it is fair to say they feel very different to how they are in the original but it certainly felt like a fair interpretation of their actions through the viewpoint of the character that Janice Hadlow has given to Mary. I’m a firm believer, even more so now, that you’d get a drastically different book from the perspective of every character in Pride and Prejudice (Mr Bennet’s would largely be irritation let’s be honest). This is Mary’s perception of events and they are sad.

In this early section, and later in the book, I was pleased that Janice Hadlow developed the relationship between Mary and Charlotte Lucas, who is, in many ways, very similar to Mary. A lot of this book is about Mary’s character being shaped by the actions of others and her perceived expectations, so to have Charlotte as an example of what might become of her was a powerful aspect of the story.

It’s when this book moves into later times that I felt the story really come into its own. We jump forward in time to a few years after the events of the original book and see Mary dealing with being an unmarried woman after the death of her father. You do get a glimpse into how the lives of the main characters from the original book have been getting on, but Mary’s life starts to go in different directions and quite quickly things move into new settings and new characters are introduced.

At its core, this book is about self-acceptance (which I don’t think will come as a surprise). I thought I would get annoyed by the story going into a romance, would it invalidate Mary to define her through a relationship, but actually I think it works. I think making it clear that Mary is worthy of the same romantic story as her older sisters was a really powerful move and I’m not going to lie I may have shed a tear or two when things got particularly lovely or perilous.

I’d recommend this to anyone who has felt like Mary got a raw deal. It’s not an easy book to get through, I spent a lot of it feeling incredibly sad, but the catharsis towards the end is all the more powerful as a result.

I received a free digital copy of this book from the publisher. All opinions are my own.

The Other Bennet Sister is out now!

What say you? What other classic characters deserve a second chance? Let me know in the comments below!