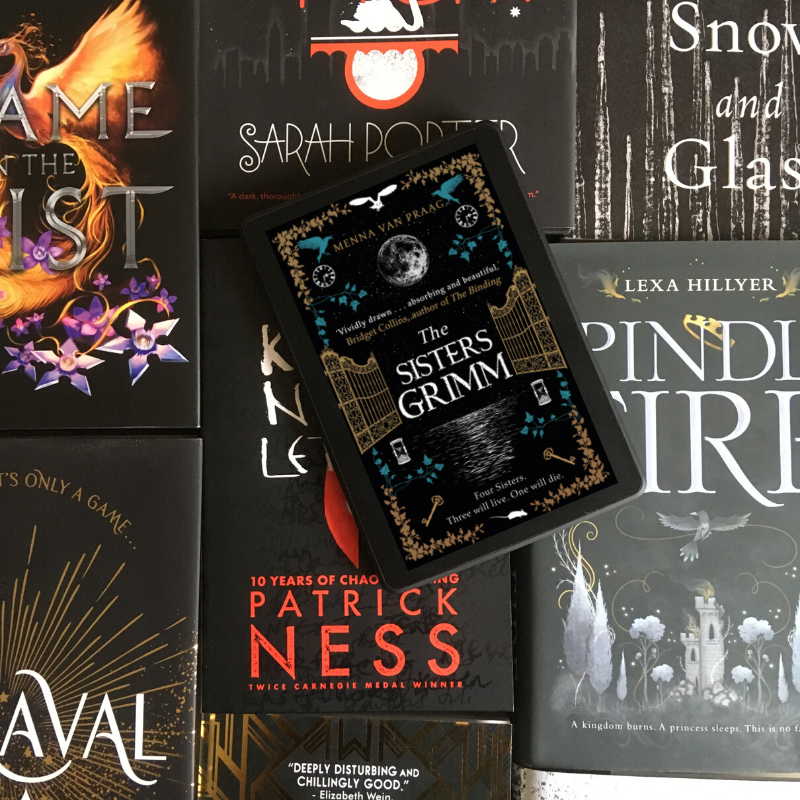 Today I’m reviewing The Sisters Grimm, the new book from Menna van Praag – an author whose work I hadn’t read before. But I’m a sucker for any book that promises a fairytale element so blindly I requested this book hoping for a fun story of sisterhood and maybe a storytelling element. 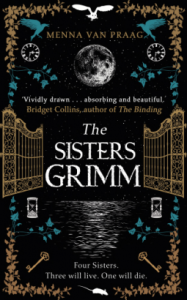 Once upon a time, a demon who desired earthly domination fathered an army of dark daughters to help him corrupt humanity . . .

As children, Goldie, Liyana, Scarlet, and Bea dreamed of a strange otherworld: a nightscape of mists and fog, perpetually falling leaves and hungry ivy, lit by an unwavering moon. Here, in this shadowland of Everwhere, the four girls, half-sisters connected by blood and magic, began to nurture their elemental powers together. But at thirteen, the sisters were ripped from Everwhere and separated. Now, five years later, they search for one another and yearn to rediscover their unique and supernatural strengths. Goldie (earth) manipulates plants and gives life. Liyana (water) controls rivers and rain. Scarlet (fire) has electricity at her fingertips. Bea (air) can fly.

To realize their full potential, the blood sisters must return to the land of their childhood dreams. But Everwhere can only be accessed through certain gates at 3:33 A.M. on the night of a new moon. As Goldie, Liyana, Scarlet, and Bea are beset with the challenges of their earthly lives, they must prepare for a battle that lies ahead. On their eighteenth birthday, they will be subjected to a gladiatorial fight with their father’s soldiers. If they survive, they will face their father who will let them live only if they turn dark. Which would be fair, if only the sisters knew what was coming.

So, they have thirty-three days to discover who they truly are and what they can truly do, before they must fight to save themselves and those they love.

Those content warnings – I needed them. But we’ll get into that.

This book follows the story of these four girls, and for the most part, the stories are totally distinct. There are some flashback moments where we see them together as children but other than that I’d say 80% of this book is following four separate narratives. It quickly becomes clear that not one of these women is having a good time in life, from financial troubles to affairs of the heart pretty much nothing is good for them. That basically sets the tone for the whole book, pretty much nothing good happens to the girls for the entirety of this story. I’m exaggerating a little but, thinking about it, when they are happy you as a reader have the background knowledge to know that it isn’t going to last long, that there are things they don’t know or don’t remember that are going to make that happiness into something even more painful at some point. That essentially leads to a pretty brutal read – as you might imagine.

I know some people ‘enjoy’ (perhaps ‘find rewarding’ is a better word) a more brutal story, so take this rather negative review as a matter of personal opinion (for the most part). But I really cannot take this kind of relentless narrative, I need those (genuine) high points or I just feel like I want to put the book down. This was particularly evident when I got towards the end of the book. The ending ought to have been a big cathartic moment, setting things on the right path, but it ended up feeling hugely rushed so it fell pretty flat for me. I don’t know if it was that there was too much to cram into this story (it’s four full storylines after all) but something was off about this book.

The one thing I don’t think was a matter of personal preference was the frustration I felt at the lack of content warnings in this book. Right at the start of the book, we have one of the characters being groped by her boss (red flag) and from there, things escalated into multiple mentions of the abuse of one of the characters as a child. I’m not saying those things have no place in fiction but if I had been given knowledge of them before requesting the book I think I would have either not read the book or gone in with a different sense of what to expect. This feels like a constant battle at the moment and I just feel like publishers (for it is the publisher who is at fault here not the author) aren’t listening to anyone!

I ended up giving this book a two-star rating because I did like some elements of the story, I liked the inclusion of queer characters and some of the setting ideas were interesting, I just felt that overall this book wasn’t for me and that the execution of the ideas wasn’t as polished as I might have hoped.

I received a free digital copy of this book from the publisher. All opinions are my own.

The Sisters Grimm is out now

What say you? Will you be reading this or is this a no? Let me know in the comments below!