Hello Humans! It’s been a hot minute, hasn’t it…

But I’ve got a WHOLE LOAD of reviews coming your way in the coming weeks, and I’m hoping that I can get back into the blogging swing of things. If you’re missing me in the meantime or I drop off the face of the earth again you can always check out my Booktube channel which is currently my priority when it comes to creating content!

But enough of that. You’re here to read a book review and I’m ready to give it to you, back in February I decided to set out on a journey, one I knew would be long and difficult, I was going to start reading the Wheel of Time series.

Knowing full well that chunky fantasy has been my nemesis in the past I thought the best thing to do would be to get hold of an audiobook of The Eye of the World and see how it went. I’m a big fan of audiobooks, especially for books that require a bit more brainpower! But how did it go? 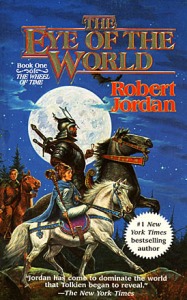 The Wheel of Time turns and Ages come and go, leaving memories that become legend. Legend fades to myth, and even myth is long forgotten when the Age that gave it birth returns again. In the Third Age, an Age of Prophecy, the World and Time themselves hang in the balance. What was, what will be, and what is, may yet fall under the Shadow.

I went into this book having done virtually no research on this book or this series as a whole, you know, how I do with most books I pick up. I think, had I been reading this as a physical book that would have been fine, since I tend to read in big chunks so there’s less chance of forgetting what happened before. With the audiobook, I was listening in smaller segments scattered across the month and I’ll confess to having slipped a few times, realising I hadn’t actually been paying attention for the last five minutes and having to skim back through the audio. In cases where I really didn’t have a handle on things, I did have to rely on some online recaps to keep everything straight in my head. For the most part, I think that’s a reflection of my own reading style (and issues) but I do think that it was quite difficult to keep myself interested in this story, particularly in the middle. Perhaps that is because I’m used to the more constant action of more modern fantasy (particularly YA) – but something to keep in mind if you find yourself flagging towards the middle you aren’t alone.

I was expecting a lot more on-page worldbuilding and was surprised to find that it wasn’t there, I think that’s just something I’ve come to expect from larger fantasy works. In this case, because we see the story unfold through the eyes of characters who are firmly ensconced in the world, none of the ‘fantasy’ elements are novel to them, so they aren’t usually explained on-page, as a reader you have to figure things out more organically. This is especially pertinent in an audiobook where you can’t always tell if something is a fantasy name or a strange way of pronouncing something or something else entirely – I was very confused when I realised how to spell Aes Sedai. That’s something that comes into play with pretty much any fantasy/science fiction audiobook – I’ve had some funny discussions with my wife about the spellings of the names of characters in things like Priory of the Orange Tree, to take a more modern example.

My overwhelming feeling, having finished the book, was that it felt like simultaneously a huge amount had happened…and that nothing had. I’m beginning to suspect that maybe that’s the point? But it may have been a point that passed me by. I suppose I just can’t see myself leaping into the next eleven books in this series, I like the characters well enough but I’m not desperate to find out what happens next? Could someone let me know if these books build to more action-packed storytelling later on? This could also be my dislike of young male fantasy protagonists coming through…do they age up?

So maybe I am curious to read more – but I think I might start reading more of them physically rather than my original plan to spend a whole year on the audiobooks – time will tell, for the moment there are enough books on my TBR to be getting on with!

I appreciate these books have hardcore fans the world over so please be nice to me in the comments – I missed out on reading a lot of older fantasy and it’s an adjustment!

Buy your own copy of the book!

Have you read this series? Which book(s) should I get excited for? Let me know in the comments below!