Another book bites the dust and I’ve got another review to write! Today I’m reviewing the latest in Victoria Schwab’s middle-grade Cassidy Blake series. I quite enjoyed City of Ghosts when I read it last year so I was looking forward to seeing how Schwab tackled a novel set in Paris. 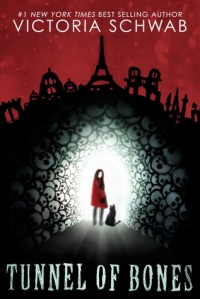 Trouble is haunting Cassidy Blake . . . even more than usual.

She (plus her ghost best friend, Jacob, of course) are in Paris, where Cass’s parents are filming their TV show about the world’s most haunted cities. Sure, it’s fun eating croissants and seeing the Eiffel Tower, but there’s true ghostly danger lurking beneath Paris, in the creepy underground Catacombs.

When Cass accidentally awakens a frighteningly strong spirit, she must rely on her still-growing skills as a ghosthunter — and turn to friends both old and new to help her unravel a mystery. But time is running out, and the spirit is only growing stronger.

And if Cass fails, the force she’s unleashed could haunt the city forever.

Prefacing this entire review with the fact that I don’t read a huge amount of middle grade, I’ve read a bit but I certainly wouldn’t call myself au fait with current genre trends or anything – for that you want a different blog entirely. I read this book and City of Ghosts because at this point I’ll read pretty much anything V puts out into the world – and sometimes that means picking up some middle grade.

I think the concept for this series is very cool, I like the idea of the young girl with paranormal inspector parents off on adventures and dealing with ghosts. It has the feel of a very good children’s TV show from back when I used to enjoy children’s TV. I like the way that the ghost stuff works and I think it makes for an enjoyable read. This book isn’t afraid to get into some of the more nasty and grizzly ways people can die (or nearly die) but it also manages to keep things fairly light. The balance of those two things is mostly achieved through the banter that Cassidy and her ghost best friend Jacob have. I liked that this book added in Lara as another facet to that relationship – though her input is largely long distance. I wonder if every book will add on another character to this scooby gang of sorts or if it’ll just be the three of them?

Where this book didn’t quite grab me as much as City of Ghosts did was in the portions that were more…Parisian? I essentially mean the parts of the story that are there to teach you a little about France, the language, the food…probably some other things as well but that’s all I remember. Perhaps this is where the ‘reading MG as an adult’ falls down a little – I already know those things about France, I don’t need pages spent explaining how crepe is pronounced and how they taste – get me back to the ghosts. I didn’t mind the parts that talked about the spookier history of parts of Paris, but the culture aspect felt a little forced and ‘YOU WILL LEARN CHILD’ for my liking.

I know the next book is set in New Orleans so it’ll be interesting to see how Schwab handles a city with such a complicated history (both recent and otherwise). My hope is that we’ll get to explore some of the larger plot elements that have been set up over the first two books, those are the things that excited me about this book. The actual plot, the Parisian ghosthunting, felt a little lackluster to me, but perhaps that’s my bias towards working out how magic/paranormal things work coming through.

Overall, I thought this was a solid book but not one that will stick with me hugely. However, had I read this when I was much younger I think I would have really enjoyed it – largely because I wouldn’t have had quite the same knowledge as I have now (although my Mum took us to France a lot and I’ve always been a know-it-all so perhaps I would have been even more obnoxious? Who’s to say?).

I received this book as a gift. All opinions are my own!

What say you? Have you read any of this series? What are your thoughts? Let me know in the comments below!