I have a full dedicated reading vlog for this book so do go and check that out if you fancy seeing my feelings about this book develop in real time!

But if you’re more one for the written word – I’m going to do my best to put my feelings about the final book in the Renegades trilogy into coherent prose! 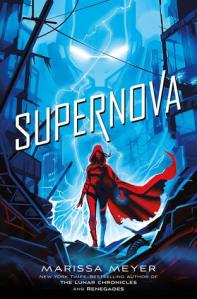 The epic conclusion to Marissa Meyer’s thrilling Renegades Trilogy finds Nova and Adrian fighting to keep their identities secret. While the battle rages on between their alter egos and their allies, there is a darker threat shrouding Gatlon City.

The Renegades’ worst enemy is back among them, threatening to reclaim Gatlon City. Nova and Adrian must brave lies and betrayal to protect those they love. Their greatest fears are about to come to life, and unless they can bridge the divide between heroes and villains, they stand to lose everything. Including each other.

It was a twisty, turny road to get to this finale and I can’t say everything happened as I was expecting it to! For a series that is quite tropey indeed I was pleased with how often Marissa Meyer pulled the rug out from under the reader’s feet. The biggest place this comes into play in this book is in the identity reveals – which I don’t think is a spoiler, surely we all knew they were coming in some fashion in this book! There are so many fake-outs and red herrings as to how things were going to happen. In some ways you could see it as a little frustrating – this was a three-book build up after all! But on the other hand, I appreciated that Meyer doesn’t do the obvious – quite often this series has opted to take the road less travelled (by superheroes) and it pays off!

I wasn’t expecting to enjoy Nova’s character right through to the end, I assumed she would get annoying or that rationalising the two facets of her character wouldn’t work – but actually, I was fairly pleased with how her character turned out and the decisions she made throughout the book. While they weren’t always the best choices they felt believable and they made sense within the story. I can’t say I was always so enamoured with Adrian who frequently felt like he made more problems than he solved – but perhaps that’s my low tolerance for male characters shining through?

This series has explored a lot of different ideas, about anarchy vs government, about who holds power and who has the right to dispense justice and they all pile together in these final moments with these characters into something quite extraordinary. This would be a great book to get young adults talking about justice – I wonder if it might have hit even harder if there had been some non-superhero issues explored through the same lense, though that might have derailed the book somewhat. Still, for people looking for YA books that could start interesting conversations, I think this could be a great option.

One thing I will mention is the epilogue, which I won’t get into too much because it’ll be a spoiler, but let me just say I personally found it quite jarring – those looking for something wholly hopeful may be a little disappointed, but I respected that Meyer didn’t just focus on one outcome of the various events!

Should you read this? I’d say yes – if you like YA and you think you might enjoy something fun and fairly quick – I think you’d enjoy this whole series.

What say you? Have you read this trilogy? Let me know your thoughts in the comments below!