Do you have any tattoos? I have two and am getting a real itch for a third (non-tacky ideas appreciated), and seeing tattoos crop up in books always excites me!

Having been somewhat disappointed by other tattoo-focussed books in the past, I was excited and a little wary about finally picking up the ARC of Ink in the Blood that I had picked up at YALC in July of last year. But with a release date looming (a release date that I have now missed…oops) I couldn’t put it off any longer! It was time to see if this was the tattoo-focussed YA I had been wanting. 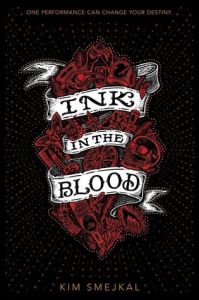 Celia Sand and her best friend, Anya Burtoni, are inklings for the esteemed religion of Profeta. Using magic, they tattoo followers with beautiful images that represent the Divine’s will and guide the actions of the recipients. It’s considered a noble calling, but ten years into their servitude Celia and Anya know the truth: Profeta is built on lies, the tattooed orders strip away freedom, and the revered temple is actually a brutal, torturous prison.

Their opportunity to escape arrives with the Rabble Mob, a traveling theater troupe. Using their inkling abilities for performance instead of propaganda, Celia and Anya are content for the first time . . . until they realize who followed them. The Divine they never believed in is very real, very angry, and determined to use Celia, Anya, and the Rabble Mob’s now-infamous stage to spread her deceitful influence even further.

To protect their new family from the wrath of a malicious deity and the zealots who work in her name, Celia and Anya must unmask the biggest lie of all—Profeta itself.

Kicking things off with what I liked about this book – and there was a fair amount. One of my favourite fantasy story elements that crop up fairly often (though perhaps not so often that I’d call it a trope) is where people pick apart the things they have been lead to believe and expose the injustices of a system. Bonus points if that system is a divine one – which is the case with this book! I was a little wary when I saw that this book was meant to be about ‘faith’  – which can mean a cringe religious fantasy but in this case, meant a book that looked at the dangers of blind faith as well as the power (positive or negative) that faith and belief can have. It’s a heavy topic to take on, especially in YA, but Smejkal handles it well, having such a cynical main character definitely helps.

On to the characters, because that was another thing I enjoyed, Celia and Anya are great protagonists, I liked that, while there is romance within the story, the primary focus feels as though it is firmly set on their friendship and how it is affected by their actions. They play off against one another without feeling as though they are ‘oppositional for opposition’s sake’, which is a great thing in my book – especially given that they come out of the same situation, it makes more sense for their motivations to be aligned. That strong friendship is what carries this book, in my opinion.

Now on to that all-important tattooing element, which is definitely the hook for this book. I’m still holding out for a book that is grounded in ‘real world tattoo culture’ as I think it’s an interesting subject to look into – this book isn’t that – but nevertheless the tattooing element is worth reading. In this world, the inklings are tasked with crafting magical tattoos that they then push onto people, tattoos that are supposed to convey the message of the goddess. What I found most compelling was the way that Celia (and others) try to create somewhat ambiguous tattoos that could mean one thing or another. It was that consideration of what tattoos can mean (and how that can have different interpretations) that really made this worldbuilding element shine.

I have to say, this wasn’t as stupendously amazing as I might have wanted it to be, I wanted more, more from the worldbuilding and the magic and maybe a little less from the romance – but that might just be me. I’m still on my quest for a great Tattoo book – but Ink in the Blood is a strong YA story nonetheless.

I received this book for free with another purchase. All opinions are my own.

Buy your copy of the book!

What say you? Got any recommendations for me? Let me know in the comments below!

One thought on “Ink in the Blood, Kim Smejkal – Book Review”