Hello Humans! Welcome back to another review.

Have you read Kings of the Wyld? Well imagine that but with a lesbian main character in the same universe who is also a bard but who likes to fight.

Kings of the Wyld, Nicholas Eames – Readalong – for those wanting to hear my thoughts on the first book. 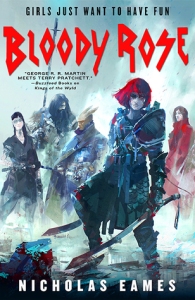 Tam Hashford is tired of working at her local pub, slinging drinks for world-famous mercenaries and listening to the bards sing of adventure and glory in the world beyond her sleepy hometown.

When the biggest mercenary band of all rolls into town, led by the infamous Bloody Rose, Tam jumps at the chance to sign on as their bard. It’s adventure she wants – and adventure she gets as the crew embark on a quest that will end in one of two ways: glory or death.

It’s time to take a walk on the wyld side.

I’ve read some reviews saying that people didn’t feel they connected as much to the characters in this book as they did to those in book one. Now personally I didn’t find that at all – for me I would say I can’t exactly remember but my gut says I connected even more to these characters. Is anyone surprised that I feel connected to a sapphic inkwitch? I mean no…but still – worth noting for those who might be worried – I found it nice and easy to connect to these characters.

I thought that for the most part this was a really strong story, I was a little confused at the start as to why you wouldn’t write a book from Bloody Rose’s perspective but now, having read it, I actually much prefer seeing her through Tam’s eyes – I think it gives her narrative even more power – that sense of mythologisation there from the very beginning. But this is one of those books where you basically follow the band on an adventure – it does feel a little bit like a D&D party going off on a main quest and tackling a side quest every now and then.

Writing that down I’m realising that…yeah…that’s 100% what this book is.

I think personally I wasn’t so sold on some of the more…emotional aspects of this story (I don’t want to spoil anything) but I think that’s because I don’t connect very much to that particular issue/life event – I expect that’s a personal thing though and everyone reading it might feel differently. That was just my qualm.

I did adore Tam – no need to mince words. I loved that her sexuality just…was – it’s there from the end of probably page four, she likes women and that’s enough said. I have to say I am obsessed with fantasy worlds where there isn’t a huge dialogue around sexuality it just exists (I see the value in exploring things like homophobia in a fantasy setting I just also enjoy not exploring it). But Tam is more than her sexuality she’s also sparky and desperate to prove herself and musical and everything I want to be when I grow up and join a travelling band of mercenaries.

I don’t have a huge amount more to say on this one because I think this is a book that just needs to be experienced. Give it a go – read the first fifty pages you’ll know if it’s your thing or not. It’s like Terry Pratchett but somehow also with a grimdark edge? Yes yes good stuff!

I bought this book myself, all opinions are my own!