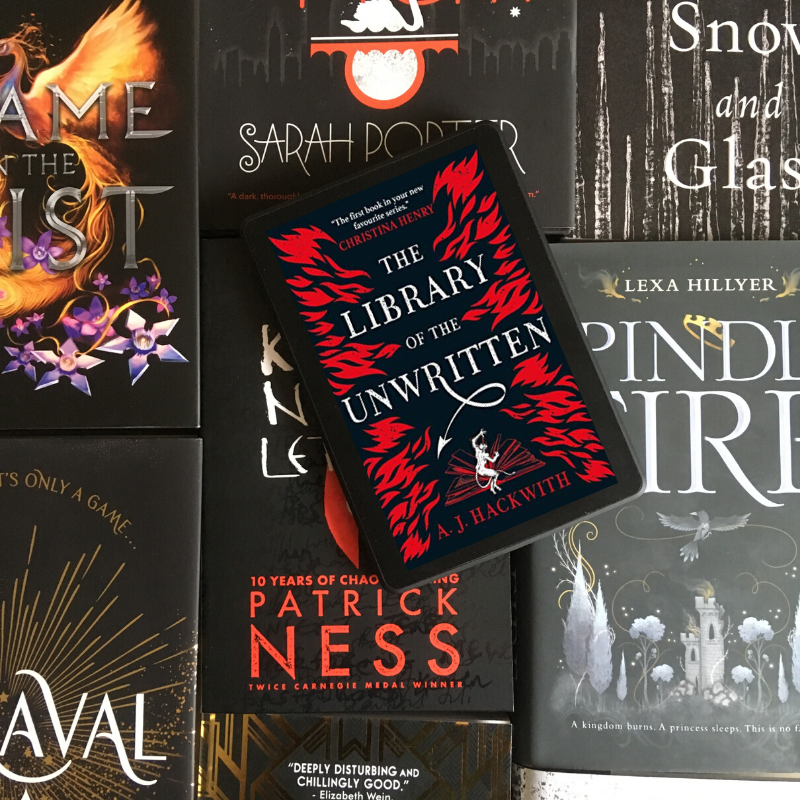 Hello Humans! Ever wondered what happened to that half-finished novel that you sometimes think about finishing? Well, imagine if you discovered it went to a library full of similarly unfinished books that just so happened to be housed in hell.

Add in a grumpy librarian, a muse, a dubious hero and a demon who is more than he might seem and you have pretty much all the ingredients for a book I would love – and I’m pleased to say that The Library of the Unwritten does not disappoint! 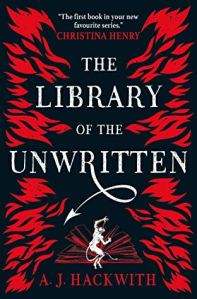 Many years ago, Claire was named Head Librarian of the Unwritten Wing—a neutral space in Hell where all the stories unfinished by their authors reside. Her job consists mainly of repairing and organizing books, but also of keeping an eye on restless stories that risk materializing as characters and escaping the library. When a Hero escapes from his book and goes in search of his author, Claire must track and capture him with the help of former muse and current assistant Brevity and nervous demon courier Leto.

But what should have been a simple retrieval goes horrifyingly wrong when the terrifyingly angelic Ramiel attacks them, convinced that they hold the Devil’s Bible. The text of the Devil’s Bible is a powerful weapon in the power struggle between Heaven and Hell, so it falls to the librarians to find a book with the power to reshape the boundaries between Heaven, Hell … and Earth.

I know that the concept of characters escaping from their books and needing to be tracked down lest they cause havoc isn’t particularly new (I mean The Unlikely Escape of Uriah Heep published in January) but I still find myself drawn to it time after time. In reading these books usually, I find that the books that stick to that as the basis for their story end up falling a little flat, whereas books like this one, which take the idea as their starting point and then expand the story, end up being some of my favourites. I’m also a sucker for any book that explores the idea of hell (without getting too religious – a hard line to walk) and with my current The Good Place obsession anything with the afterlife – or even afterlives – is a surefire win. The plot of The Library of the Unwritten starts very strong, the group of ‘heroes’ is introduced quickly and they set off on their quest for the Devil’s Bible without too much preamble – beyond some quick worldbuilding moments to help you to get a feel for how the library functions. I thought that A. J. Hackwith managed to balance the worldbuilding information needed in such a high concept story with an exciting and engaging plot. Often you get the sense that an author is all too pleased with their own ideas – not so in this book, it’s clever and interesting but it doesn’t shout at you about how interesting it is!

The characters in this book are really solid, very rarely do I like every character in a questing band but in this case, I thought they all had something to offer. There’s very much the feeling that this could be a Dungeons and Dragons campaign – with the bringing together of different beings who might otherwise not have met. I particularly enjoyed ‘grumpy librarian’ Claire (our main character) and her Muse apprentice Brevity – of course, Judith loved both the female characters – but the blokes are good too. I found it interesting that later in the book, when parties become more split, that the character relationships still worked, the banter was still amusing, the chemistry was still there. I think that’s a testament to well-rounded characters.

The only place this book fell down for me was towards the ‘end of the middle’ section. This was where a lot of the ‘backstory reveals’ had happened and we were drawing up to the big climax of the story. Something about no longer having those driving backstory elements made this fall just a little flat for me, which is a shame because the start of the book is really strong. I think at that point there is just so much happening in this story that it’s hard to keep track. Of course, these things are almost always dependent on the mood you’re in when you read but I thought it worth mentioning.

Often when books tackle the idea of hell or the afterlife they get into big thoughts about religion and God and so forth. I appreciated that this book didn’t do that, it doesn’t shy away from the idea, but it also very much feels like someone has gone ‘that’s not what this story is about’. As someone who likes the idea of hell as a setting but who doesn’t often have the brain for big theological debate, I definitely appreciated it! It’s an adventure story at the core and the tone of the ‘thoughtful’ portions reflects that.

Overall, I’d recommend this book to anyone who loves the concept – because I’d say it lives up to that idea! I’m always here for a book that features a supernatural library – so this is a win for me.

I received a free copy of the book from the publisher. All opinions are my own.

The Library of the Unwritten is out now!

5 thoughts on “The Library of the Unwritten, A.J. Hackwith – Book Review”